The Battle of Midway was fought between seven carriers. Compare this to the Battle of the Philippine Sea which featured a total of 24 carriers on both sides! It was simply the largest carrier battle of all time which will never be surpassed.

Clash of Carriers, by designer Mark Stille, portrays this epic battle. The historical result saw the Japanese carrier force shattered, never to recover for the rest of the war. While this showdown is almost always treated as a one-sided affair, in this game players will have every opportunity to better the historical outcome or maybe even reverse history.

The Japanese player can use the superior range of his carrier- and land-based aircraft in coordinated waves to hit the US Navy while his fleet maneuvers out of US aircraft range. Historically, despite poor aircraft coordination, many Japanese aircraft broke through the US fighter screen to attack US carriers. What could better coordination accomplish?

The American player can opt for an offensive strategy with a number of task groups to try and inflict even more massive losses on the Japanese naval force instead of settling for defeating the Japanese air strikes. US submarines inflicted losses and tracked Japanese fleet movements — can they do so again, or will Japanese counter-measures foil historical results? 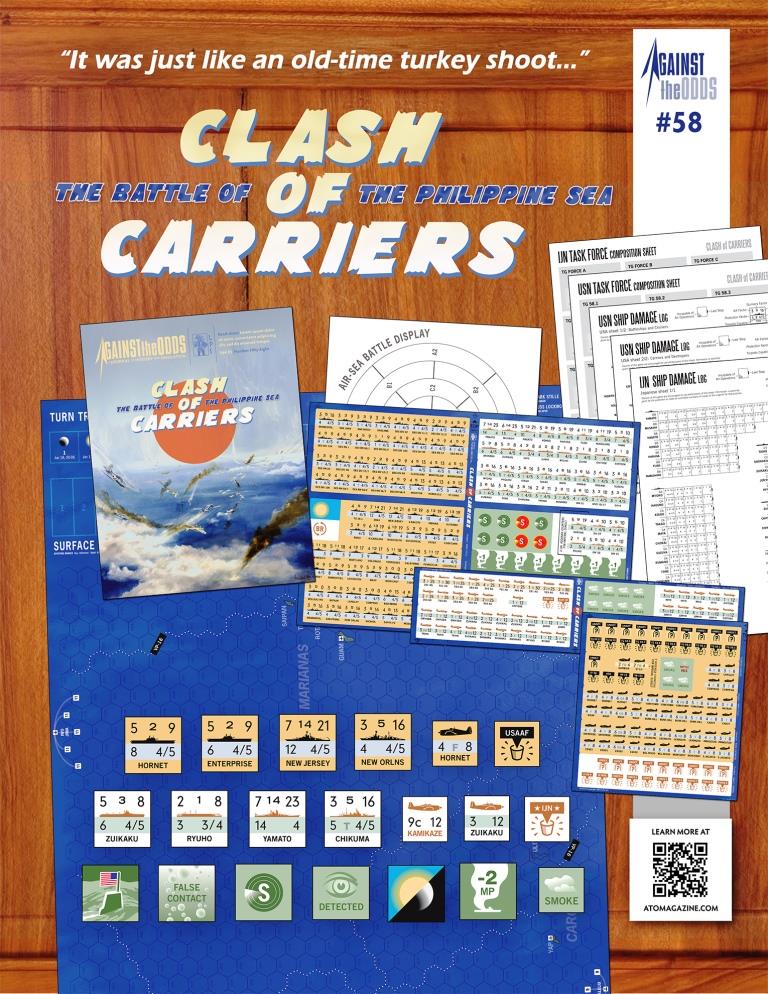 Clash of Carriers uses the same game system as Imperial Sunset (in ATO #17) which stresses playability over complexity. Random activation allows air and naval forces to maneuver and attack.

Task group, submarine, and dummy task group counters maneuver on the map, adding uncertainty to enemy force locations. Detection plays an important role in the game, but uses straightforward mechanics to enhance fog of war but not overwhelm other aspects of the game. Neither player will possess perfect knowledge of an enemy task group until the AA fires, bombs drop, and torpedoes launch.

Once found, air strikes and surface battles play out on tactical maps for speedy resolution. Anti-submarine warfare is equally smooth. Carriers, battleships, and cruisers are denoted by individual counters, while destroyers are represented in squadrons. Two to four counters are used to represent the various air groups on both sides.

The basic historical scenario offers the 1944 OBs, but what-if scenarios add optional surface and air forces and allow greater flexibility and coordination than performed in history.