BATTLES FOR THE SHENANDOAH: A DEATH VALLEY EXPANSION

Battles for the Shenandoah: A Death Valley Expansion is the ninth installment of the Great Battles of the American Civil War (GBACW) series, published by GMT Games. Four full battles are included.

McDowell, May 8, 1862 McDowell is considered the first battle of Stonewall Jackson’s 1862 Valley Campaign. After his loss at Kernstown, Confederate General Thomas J. “Stonewall” Jackson retreated up the Shenandoah Valley, finally stopping at Swift Run Gap to rebuild his army. By May of 1862, the threat from the north had diminished when two of the three Union divisions under General Nathaniel Banks were redeployed to support the Union advance on Richmond.
However, there was another Union force, led by Brigadier General Robert H. Milroy, approaching the critical town of Staunton from the west. Jackson planned to drive the Union from the Shenandoah Valley and help relieve the pressure on Richmond by consolidating several scattered Confederate forces and defeating the two Union armies in detail. The first step was to move his army to join Brigadier General Edward “Alleghany” Johnson’s Army of the Northwest and defeat Milroy.

The Confederate armies were consolidated on May 6 and begun advancing on Milroy’s Union force. Milroy retreated before them until May 8th, when he was reinforced with a brigade under Brigadier General Robert C. Schenck. That afternoon, the aggressive Milroy turned to attack the Confederate forces arriving on the heights overlooking the hamlet of McDowell.

2nd Winchester, June 13, 14, and 15, 1863 2nd Winchester is the battle that cleared the way for Robert E. Lee’s Gettysburg Campaign. In June of 1863, General Robert E. Lee finalized his plans for his second invasion of the north. The supply line was to be routed through the lower Shenandoah Valley, then primarily occupied by a Union garrison at Winchester with smaller garrisons at Berryville and Martinsburg. Lee assigned the task of clearing the Valley to Lieutenant General Richard S. Ewell, now in command of II Corps after Jackson’s death at Chancellorsville in May. 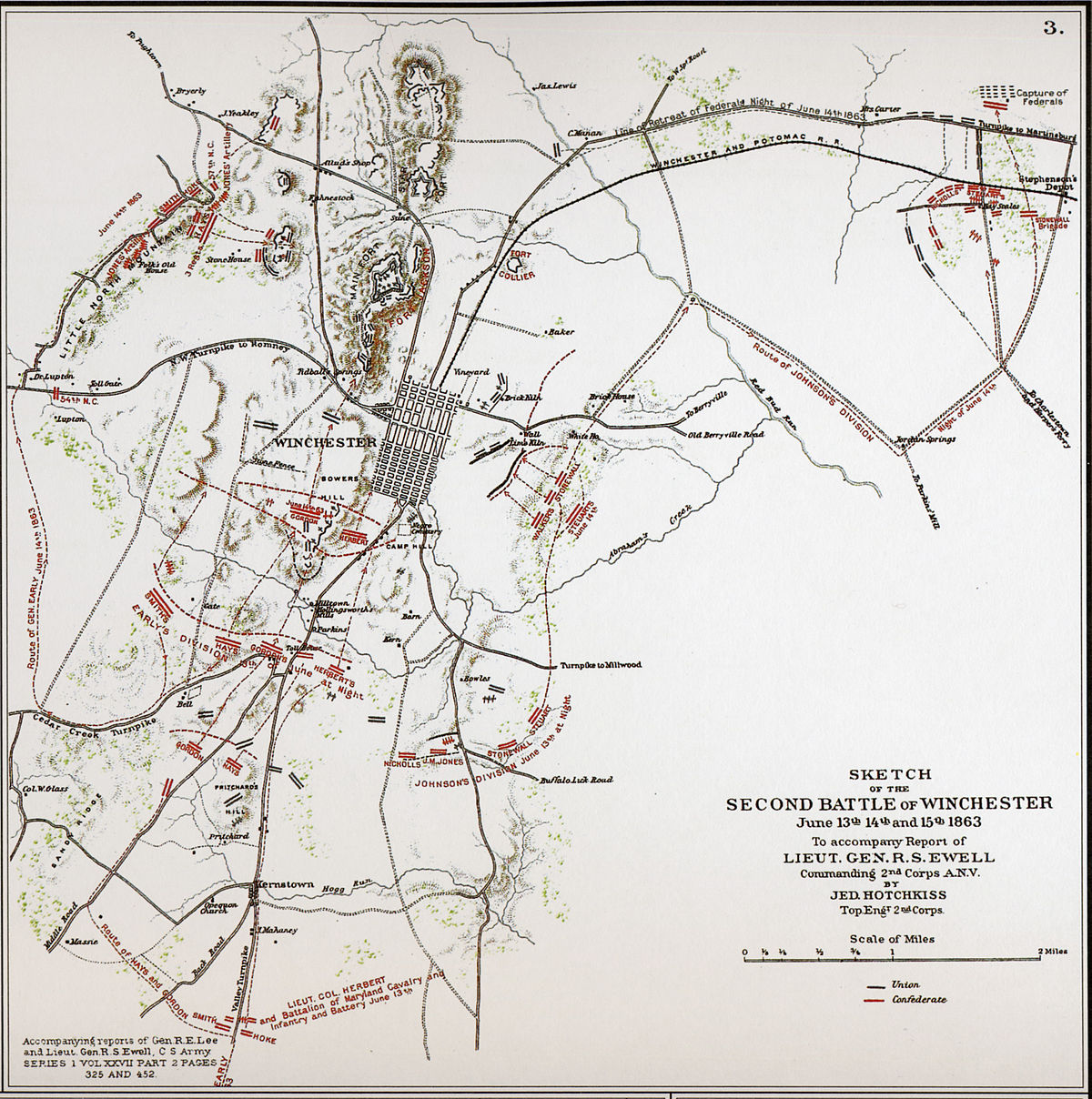 The Union garrison at Winchester consisted of the 8500 men of the 2nd Division, VIII Corps, commanded by Major General Robert H. Milroy. Milroy had made extensive improvements to the fortifications around Winchester and was confident that he could hold the position against anything the Confederates could throw at him. He was so confident that he ignored orders to abandon Winchester. On June 13, he discovered that Ewell had arrived.

Piedmont, June 5, 1864 Piedmont was the first Union victory in the Valley since Kernstown in 1862. The Confederate loss compelled Lee to send Lieutenant General Jubal Early’s II Corps to retake the Shenandoah Valley, effectively ending any hope Lee may have had for offensive operations around Richmond.
After New Market, Union Major General Franz Sigel was replaced with the more aggressive Major General David Hunter, who made another move up the Valley with a larger and better organized army of 12,000 men. Hunter’s move caught the Confederates by surprise. Initially, the only opposition was a brigade of Confederate cavalry led by Brigadier General John D. Imboden. Every able-bodied man in the area was called to the Confederate colors, including miners and militia reservists. Two brigades of infantry under Brigadier General William E. “Grumble” Jones and a cavalry brigade led by Brigadier General John C. Vaughn were rushed by rail from the Trans-Allegheny Department. The combined Confederate force, commanded by Grumble Jones, numbered about 5000 men.
On June 5th, the Confederate cavalry skirmished with the leading Union cavalry, delaying the Union advance long enough so that Grumble Jones could deploy his newly arrived troops and begin fortifying a new position near the hamlet of Piedmont. Hunter’s infantry arrived at this new line around noon. 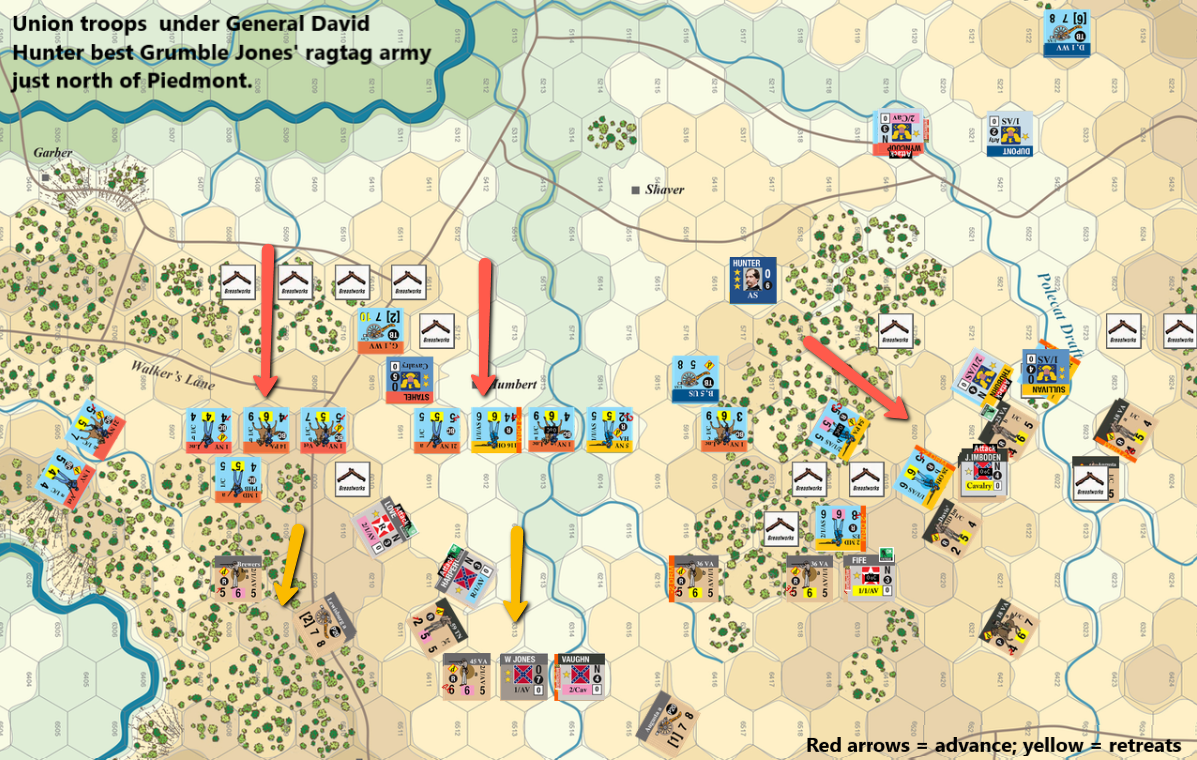 Union Prevails at Piedmont (VASSAL image, not final art)
Cool Spring, July 18, 1864 Cool Spring is a battle from Jubal Early’s 1864 Valley Campaign. During his retreat from the drive on Washington, Early moved into the Shenandoah Valley through Snicker’s Gap and crossed the Shenandoah River at Castleman’s Ferry. His Union pursuers, formations from VI Corps, XIX Corps, and the Army of West Virginia led by Major General Horatio G. Wright, were close behind. Brevet Major General George Crook, at the head of Wright’s column, was ordered to “cross if practicable and attack” with his Army of West Virginia.
When a cavalry probe of Castleman’s Ferry was easily repulsed, it was decided to move downstream, cross the Shenandoah River at Island Ford, and then turn south to catch the Confederate defenders of Castleman’s Ferry in flank. Crook’s 1st Division, led by Colonel Joseph Thoburn, began the crossing in the middle of the afternoon after waiting for the lead division of VI Corps to arrive in support. The fords appeared to be lightly defended by the Confederates, but a captured skirmisher revealed that the divisions of Brigadier General Gabriel Wharton and Major General Robert Rodes were nearby. The lateness of the Union move surprised Early, but he had issued orders the night before to contest any Union crossing, and Wharton and Rodes were both moving within the hour.

The Great Battles of the American Civil War Series: This series is one of the hobby’s longest-lived design concepts, springing from the legendary regimental level Gettysburg game – Terrible Swift Sword (SPI) – designed by Richard Berg in 1976. Under GMT Games, the rules system has remained stable but has shown remarkable flexibility to allow each game to smoothly incorporate additional rules to reflect the historical battles. The series relies on interactive chit-pull mechanics to simulate the oftentimes-chaotic nature of the 19th Century battlefield at the regimental level.

The Game: Battles for the Shenandoah: A Death Valley Expansion contains four battle games with multiple scenarios. Experienced players will be able to play many of the scenarios in one sitting. The game reflects the development of the cavalry and the changes in infantry and artillery organization and tactics from 1862 through 1864.