BACKGROUND: For two hundred years, war waged back and forth across the border between England and Scotland. From Stirling Bridge to Bannockburn, the battles are famous, as are the protagonists: William Wallace, Robert the Bruce, and Edward I, Hammer of the Scots. By 1482, the unfortunate town of Berwick-upon-Tweed, once the richest port town in Scotland, had changed hands thirteen times. By the time Henry VIII ascended the throne of England in 1509, the fifty-mile-wide stretch of rolling hills and stunning vistas that straddle the border had seen decades of hardship and atrocity.

Yet still the hardy families living on these frontier lands persevered. Unable to count on crops surviving until the harvest, they subsisted primarily on the livestock they could shepherd in the fields near their homesteads. When supplies ran low, raiding to steal what they needed from their neighbors was often the answer. Perhaps no Border story is more famous than the wife who served her husband his spurs on a plate: a clear sign that it was time for him to go raiding if he wanted to see his supper.

Raids were often carefully planned operations with several border families uniting to steal livestock from a common foe in the dead of night. Cattle and sheep were the likely targets, often with hundreds of these creatures being stolen in a single raid. The reiver’s goal was to herd their quarry to safety before the retaliatory “hot trod” pursuit could catch up and force an engagement.

To combat this constant hostility, England and Scotland established the system of March Law. Each nation divided its border lands into an East, Middle, and West March with each of these six territories administered by a Warden responsible for keeping the peace. The Wardens were drawn from the most powerful families on the Borders, clans of great renown that could put upwards of a thousand men in the saddle in times of need. The March Law would have succeeded too, but for the fact that these same great families were usually the ones best equipped and most inclined to raid their neighbors. And thus the cycle of looting, raiding, and feuding among these families would continue for another century, throughout the reigns of both Henry VIII and his daughter the Virgin Queen Elizabeth.

THE GAME: In Border Reivers, each player rules over one of the Marches as leader of one of the six major riding families of the border: Grey, Fenwick, Dacre, Maxwell, Kerr, or Hume. Your goal is to increase the wealth and fame of your clan throughout the reigns of Henry and Elizabeth to end the century as the most famous Border Reiver of all time. Players gain VPs from successful combats, amassing large herds of livestock, and by elevating their Notoriety above the other players in the regions of the map.

Here are some quick facts about the game:

Number of Players: The game plays best with 4 or 6 players, though 2 and 3-player versions are also supported (where each player leads both an English and a Scottish family).

Playing Time: 2 to 3 hours. The shorter 2-hour time applies to the 2 or 4-player games where two of the Marches are out of play. No matter the number of players, most game activities are performed simultaneously to ensure a minimum of down time.

The Map: The 22 x 34” game map depicts each of the six historical Marches and the no man’s land sandwiched between the two nations known as “The Debateable Land.” Each March is home to a major town (with Gaol for captured reivers), a player’s Family Castle, and four Farm Regions where that player can raise sheep (to represent their wealth in livestock). 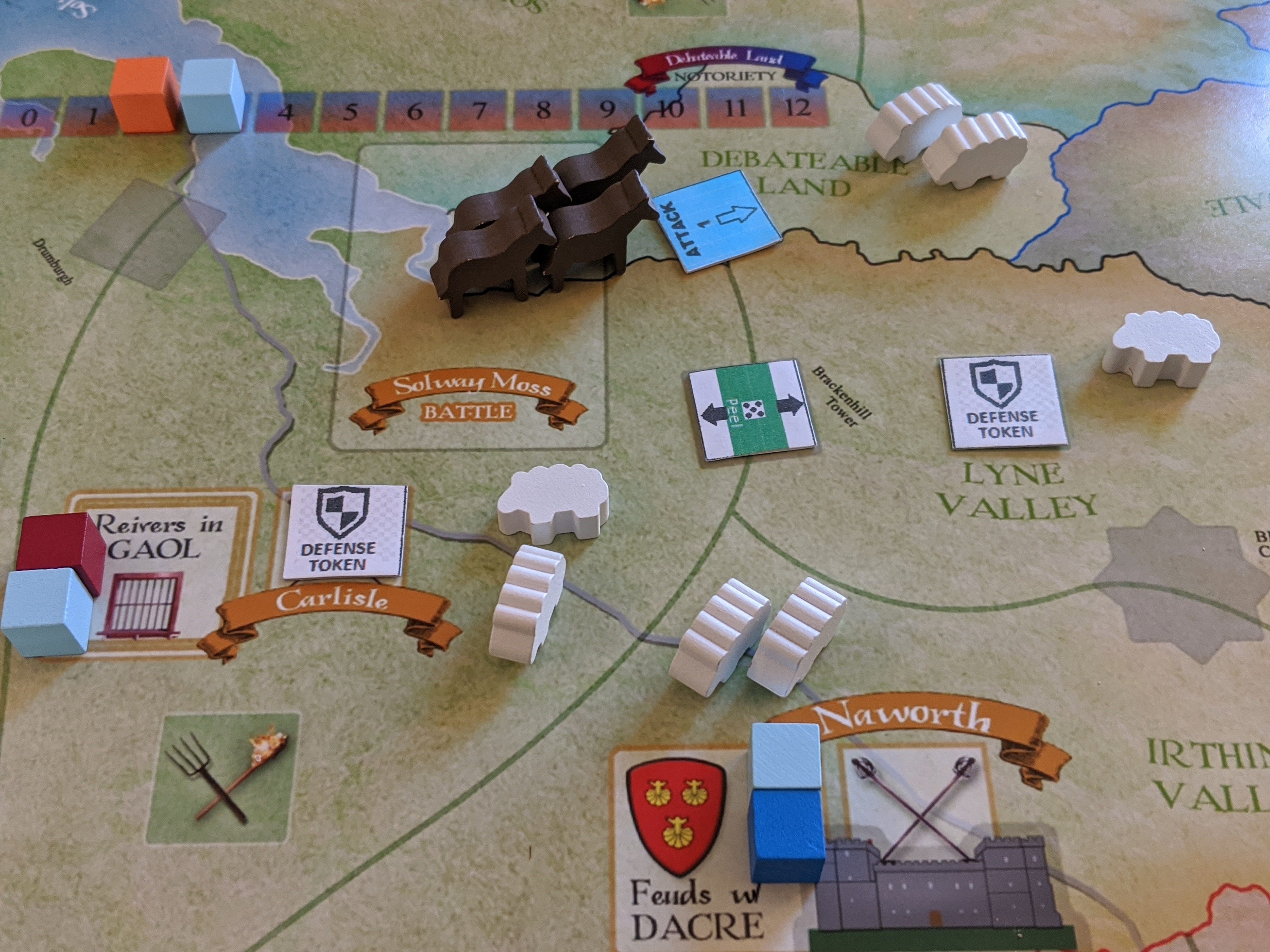 Basic Flow: A game of Border Reivers is divided into three turns, each representing a progressively more deadly segment of 16th Century Border history. Each turn is sub-divided into seasonal segments.

In Summer, players build their strength through a card-drafting system that lets you strengthen your March for the winter raids that follow. Players build fortified peel defense towers, garrison old castles, and build walls around their farmhouses (creating “bastles”) to guard against enemy raids. At the same time, you recruit famous reivers and wardens to your cause and ally with the most notorious clans of the time (including the infamous Elliotts, Scotts, Johnstones, and Armstrongs). And don’t forget to buy the favor of the most powerful office holders, whether it be the Bishop of Carlisle, the Keeper of Liddesdale, or the mighty Lord Warden of the Marches.

As the air cools and Fall arrives, players commit their defensive assets to the map to prepare for the raids and feuds that are soon to follow. At this time a set of events drawn from the history of the region are chosen, presenting the players with short-term opportunities that may gain them an advantage. Events include the battles of Flodden Field and Solway Moss, Henry VIII’s Rough Wooing to try and force a marriage alliance, Mary Queen of Scots’ tour of the Scottish borders, and the Catholic Rising of the North.

To initiate Winter combats, players select one of their Target cards to secretly designate their intended combat activity. Options include launching a Raid to steal precious livestock, joining their national army as light cavalry forces in one of the historical Battles, or representing their family against a specific target player with whom you have a Feud or Gaolbreak attempt that needs to be prosecuted. Careful play of cards that were drafted during the Summer can help these combats break favorably for your clan.

At last, Spring arrives and the raiding ceases. It’s time to count points and sing of the heroic exploits just witnessed. And on the final turn, that’s exactly what happens—players cash in one or more of the Border Ballad cards for extra VP, especially if the ballad aligns with the strategic path they have followed throughout the game. Which ballad will commemorate your deeds on the Border? May you fare better than Johnny Armstrong, the subject of the famous ballad “Armstrong’s Goodnight,” that captures the spirit of the Reivers:

Said John, Fight on, my merry men all
I am a little wounded, but am not slain;
I will lay me down and bleed awhile,

Then I’ll rise and fight again.

MY REIVER JOURNEY: In some historic gift shop during our April 2006 family tour of the historic sites of Northumberland (I don’t think it was Alnwick or Bamburgh Castles, perhaps the Vindolanda Roman Fort museum?), I stumbled upon an amazing map. The “In Search of the Border Reivers Ordnance Survey Map” amazed me because it showed that the entire Border region was dotted with hundreds of ruined stone tower and castle sites. Why had they been built? What wars were these? Why did this map look like an amazing game that needed to be designed? How did this all happen during the Here I Stand period and I never realized it? To answer all these questions, I bought the map and accompanying book, George MacDonald Fraser’s “The Steel Bonnets.”

I had finished the book before we returned home and already knew I wanted to capture this underappreciated time in a game. My early designs were not workable, so the game was shelved to make room for the release of Virgin Queen in 2012. But the seed had been planted. Finally, in 2020, it is ready to bear fruit…or sheep…or cattle. I hope by sharing Border Reivers with the GMT community, their story can capture your imagination too.