RESERVA TANTO MONTA: THE RISE OF FERDINAND AND ISABELLA

BACKGROUND: 1469—The Iberian Peninsula has been splintered into numerous caliphates and kingdoms over the last 700 years. Warfare—part of the desperate competition between Christian and Muslim faiths often referred to as the Reconquista—has been the one constant. Now age 18, Isabella of Castile has already been offered in marriage alliances to both Portugal and France. Against the wishes of her brother, King Henry IV, she refuses both deals and instead elopes to marry her original betrothed, Ferdinand II of Aragon. Within five years, her brother is dead, and Isabella is named Queen of Castile. But can this fragile alliance between Castile and Aragon hope to prosper facing threats from all sides?
Tanto Monta: The Rise of Ferdinand and Isabella covers the period from 1470 to 1516, the height of the Age of Discovery and the years leading immediately into the period covered by Here I Stand: Wars of the Reformation, 1517-1555. The game opens with Isabella’s disputed ascension to the throne of Castile, a position contested by a Portuguese-backed faction supporting Joanna La Beltraneja. Ferdinand’s possessions are similarly threatened by Aragon’s ongoing civil war against forces from the Principality of Catalonia, a faction often supported by France. How can these young Catholic Monarchs possibly deal with both these crises while still pursuing their agendas to unite their two kingdoms into a single Spanish realm, subjugate the Canary Islands, and finish the reconquest of Granada?

Opposing the Spanish player are three more emerging powers. Portugal has been immersed in the exploration of West Africa under the guidance of Prince Henry the Navigator. Can they push further around the coasts of Africa and establish direct trade with the spice merchants of India? Meanwhile the French, initially led by Louis XI the Prudent, are trying to emerge out of the Hundred Years’ War against England and consolidate the power of the crown over the nobles of that land. Once ready to push south, the French nation will compete against Spain for lands from Navarre in the west to the city states of Italy in the east. And the Muslim forces are still roadblocks to all these ambitions. The Nasrid Kingdom of Granada will fiercely defend against further incursions against their highland strongholds. The Kingdom of Fez in North Africa opposes the Portuguese attempts to deny their monopoly over the spice trade. And additional Muslim forces from the Ottoman Empire and the Berber lands along the North African coast are sure to assist in the years to come.
And thus the stage is set for these four powers to compete on the battlefield, at the diplomatic tables, and across the oceans of the world. Can one of these powers unite their homeland and set the stage for a truly global empire? 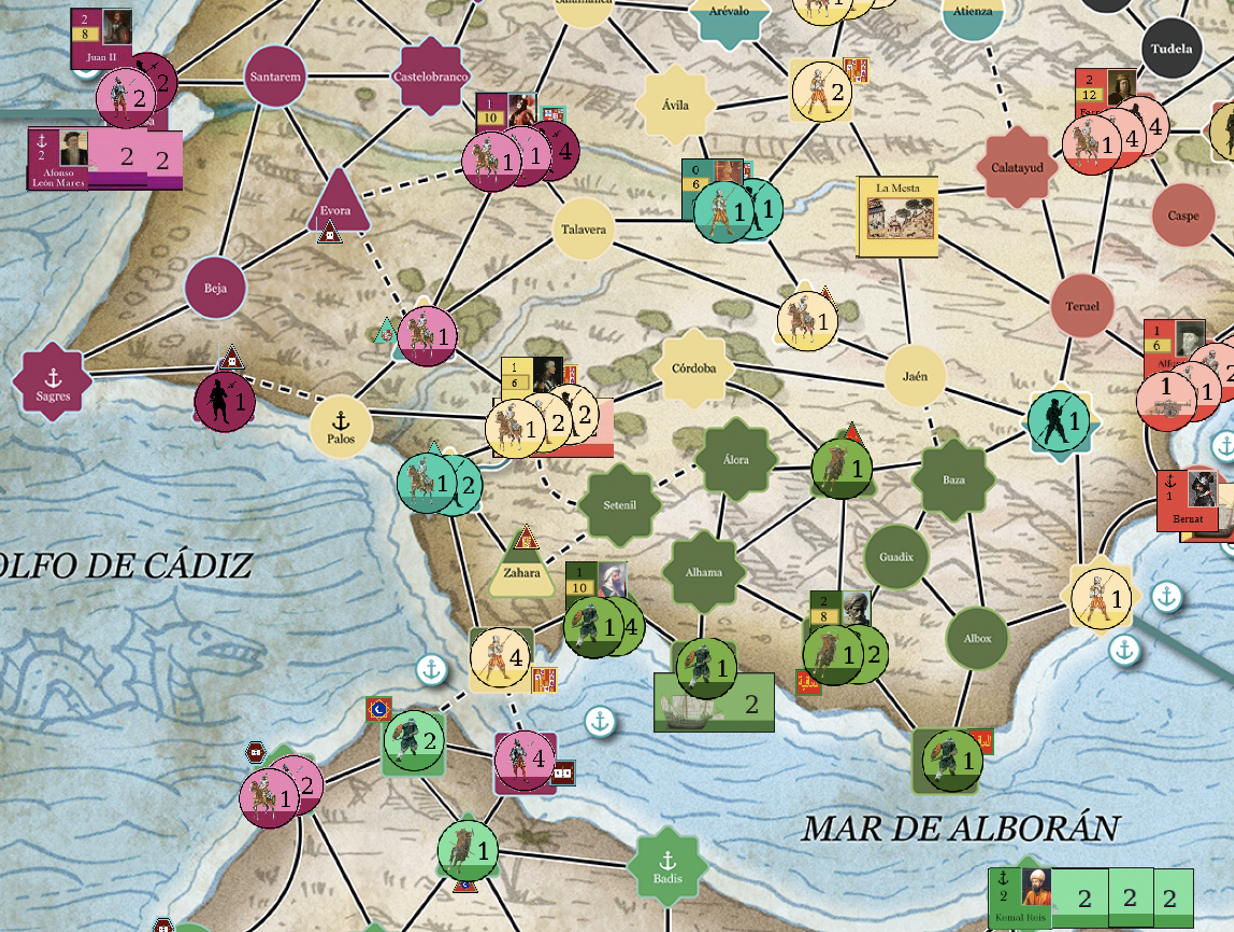 THE GAME: In Tanto Monta: The Rise of Ferdinand and Isabella, each of the four players rules one major power and another secondary power as follows:

This is a 4-player game, no more and no less.

Game Length: A game of Tanto Monta lasts up to 7 turns with a duration of about 45 minutes per turn. The winner is the first player to 45 VP with automatic and domination victories also possible.
Map: The main map represents the western Mediterranean region including the Iberian Peninsula, Southern and Central France, the Italian Peninsula, and the Maghreb in North Africa. The Canary Islands are also included. A supplemental Exploration Map depicts Africa, the Indian Ocean, and the New World, locations where voyages of exploration and colonization take place.

Basic Flow: Retaining many of the game systems from Here I Stand and Virgin Queen, turns start with each player being dealt a hand of cards from the shared deck to supplement their Home Cards (which provide unique actions for each major and secondary power). After diplomatic negotiations and spring preparations have concluded, players play these cards as events or operations to conduct military, political, or exploration actions to maximize their victory point gains. At the end of each turn, armies winter, royal marriages take place, and—unless there is a winner—the game resets in preparation for the start of the next turn.
Minor Powers: The Kingdom of Navarre and the Italian states of Genoa, Florence, Naples, and the Papacy each play significant roles in the diplomatic landscape of the game. Important independent cities and the Guanche population on the Canary Islands also field defensive military forces. Other political entities are indirectly represented in the game through events and foreign wars, including England, Burgundy, Brittany, and the Ottoman and Holy Roman Empires.

New Features: Tanto Monta introduces several innovations to the game series. The land combat system is enriched with the addition of explicit siege artillery units and cavalry units for all major powers, which can try to turn the tide in battle by making a dedicated cavalry charge. The spring phase is also extended to include play of Headline Events, chances to use a powerful hand to score bonus VP and sneak in an extra event card play before the turn is fully underway. Finally, the enhanced Exploration Map systems depict the arrival of Vasco Da Gama in India and Christopher Columbus in America and include explicit rolls to try and navigate into the Terra Incognita.
COMPONENT LIST: