1871, The Rise and Fall of the Paris Commune

Following the Franco-Prussian War, Paris has been besieged by German troops since September 18, 1870. Only protected by the National Guard (composed mostly of Parisian workers and craftsmen), the people of Paris, hard-hit by the siege, feel humiliated by the decision to sign an armistice with Germany in January 1871. The common folk are hungry and angry.

So when Adolphe Thiers, head of the government, tried to seize the cannons from the National Guard in Montmartre and sent regular troops to Paris on March 18, the Parisians rose against the political and military leaders who had retreated to Versailles.

Red flags are flying high over Paris. The Parisian revolutionaries take control of the French Capital, leading to the beginning of the Paris Commune, a socialist and popular government that would rule the City of Light from March 18 to May 28, 1871. The tension escalates between the Commune and Versailles until the tragic events of the Bloody Week.

Red Flag Over Paris, the spiritual successor to Mark Herman’s Fort Sumter, is a short, yet challenging, two-player card-driven game depicting the two months of intense confrontation between the Communards and the government in Versailles during the 1871 Paris Commune. You will play as one of these factions and fight for control over Paris. But, you will also need to win the hearts and minds of the French population, as the board is divided into two areas–military and political–themselves divided into several dimensions (Political Institutions, Public Opinion, Paris neighborhoods, and the forts on the outskirts of the city). The game forces players to make tough decisions like when to focus on political influence or military dominance and how to optimize limited resources. 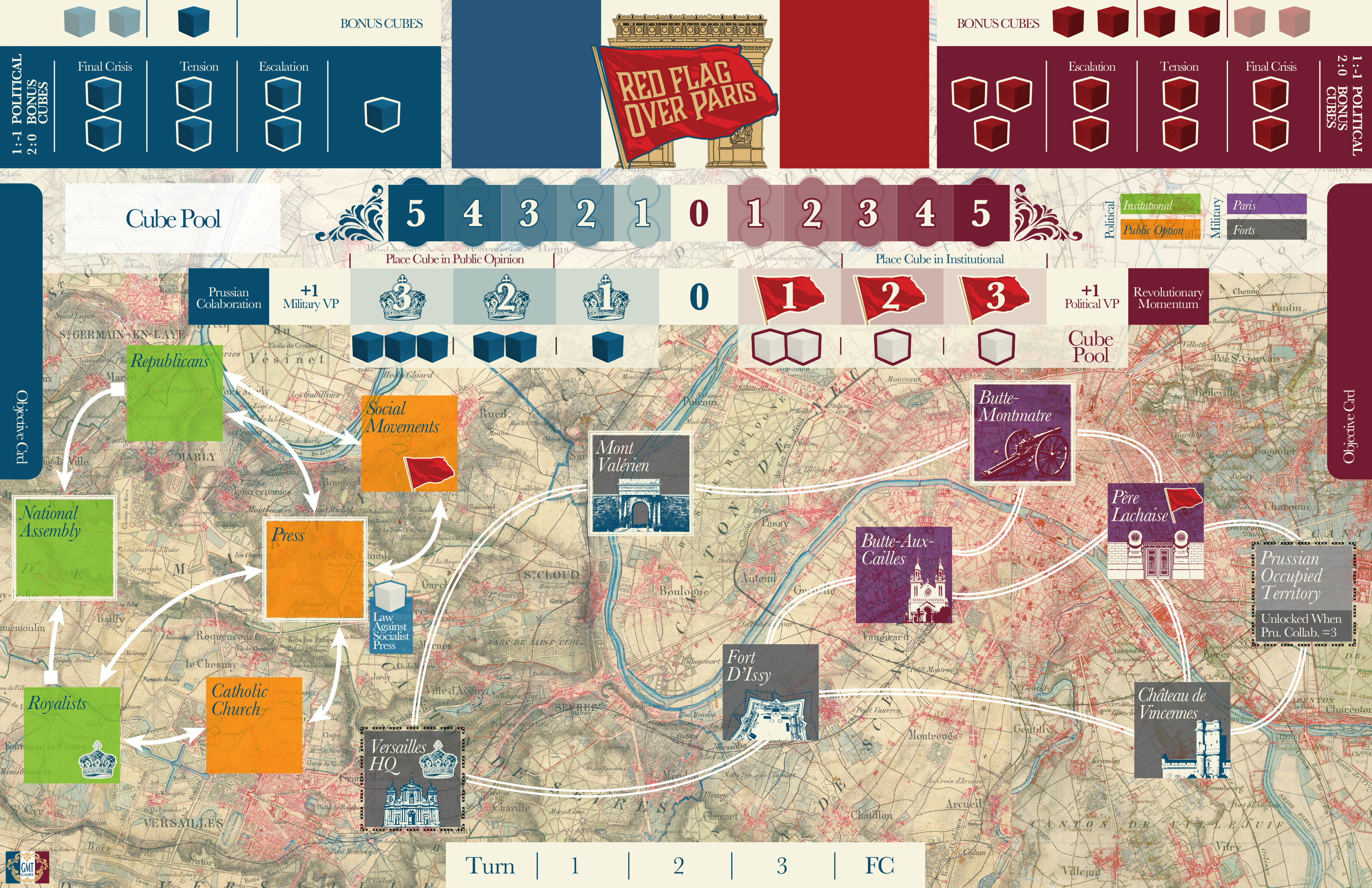 On top of controlling the military and political spaces and fulfilling your objectives to score Victory Points, you will have to manage your momentum. Versailles needs to collaborate with the Prussian invader to build up an army that will restore order in the Capital. On the other hand, the Commune needs to build a robust revolutionary momentum to ensure that the population stays mobilized after months of siege and food shortages.

Each card represents either a critical personality or a significant event of the Paris commune. You may use a card for its event, for its operational value (which allows you to place or remove influence cubes in any given area), to buy an event discarded by your opponent, or build your momentum. After up to three rounds, Red Flag Over Paris culminates in a Final Crisis where each player will have to play all the cards they left aside earlier in the game as the last opportunity to place influence before determining the winner.