RESERVA THE BRITISH WAY: COUNTERINSURGENCY AT THE END OF THE EMPIRE

The answer [to the uprising] lies not in pouring more troops into the jungle, but in the hearts and minds of the people.  – General Sir Gerald Templer, High Commissioner in Malaya

[W]e had if I can use a cant phrase to “win the hearts and minds of the people.” But how could we as strangers win the hearts and minds of the Kikuyu in opposition to their brothers and cousins who were in the forests? It was a vain hope, all the same in the end we did wear them down and wearing down is the proper word.  – Sir Richard Turnbull, Chief Secretary in Kenya

The British Way: Counterinsurgency at the End of Empire is the first of several COIN multipacks, containing four separate games exploring a series of thematically related insurgencies. Between 1945 and 1960, the British fought four major “emergencies,” as they referred to their counterinsurgency campaigns, each trying to manage their retreat from empire. The four games in this pack focus on exploring British counterinsurgent responses to a variety of different opponents, including communist insurgents in Malaya, militant nationalists in Kenya, and smaller and more clandestine terrorist organizations in Palestine and Cyprus. The games adjust the core COIN mechanics to provide a compelling new way of handling two-player conflicts, while also streamlining several mechanics to quicken gameplay. The British Way offers an approachable introduction to the COIN series for new players, while presenting experienced players with four mechanically distinct games to explore and compare. 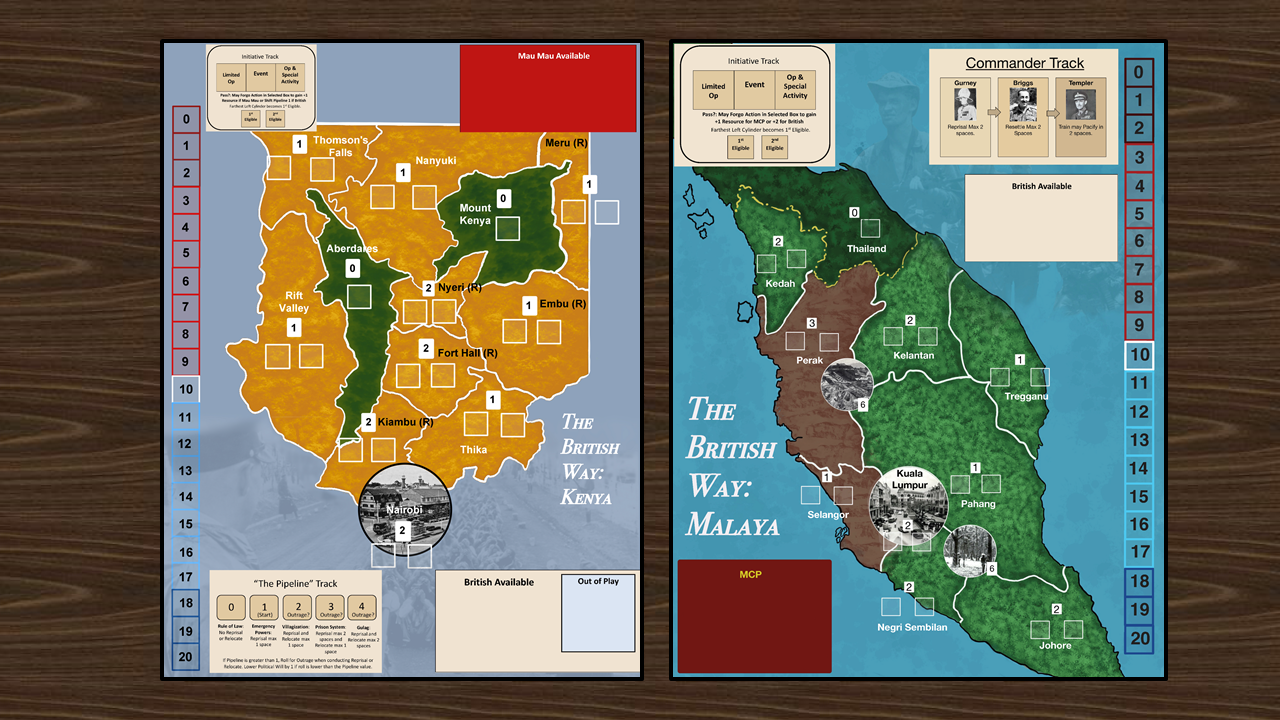 Prototype maps for Kenya and Malaya

Malaya
The British Emergency in Malaya (1948-1960) is viewed by some as the classic case of a successful counterinsurgency campaign, fought against an insurgency led by the Malayan Communist Party. The Malayan Emergency significantly influenced counterinsurgency theory and would become a model case, later appealed to by commanders in conflicts ranging from Vietnam to the present. The British Way: Malaya is the perfect introduction for players new to the COIN series, offering a shorter two-player game experience that will give players some familiarity with Government and Insurgent factions in other modern COIN volumes, such as Cuba Libre or A Distant Plain. For experienced players, it also serves as a good introduction to the new core mechanics in The British Way by offering Factions and Operations that will be familiar from previous COIN volumes but with several new systems, such as the Political Will track, streamlined Sequence of Play, and a shifting British Commander Capability.

Prototype event cards for Malaya
Kenya
The British Emergency in Kenya (1952-1960), fought against the Mau Mau insurgents, dramatically departed from the strategy modeled in many of the modern COIN volumes, with a heavy focus on coercion rather than winning ‘hearts and minds.’ In game terms, this means a shift away from building ‘Support’ towards new mechanics modeling various forms of repression used by the British in Kenya. However, their use of repression can have political consequences back in Britain, represented as a potential penalty to Political Will—as one British official noted, “If we sin, we must sin quietly.” The British player must balance this core tradeoff, while the Mau Mau player must mobilize the Kikuyu population and expand their revolt to survive the overwhelming British response. The British Way: Kenya depicts a dramatically asymmetrical conflict where an extremely poorly equipped insurgency must utilize clever (and in some cases brutal) tactics to try and ride out an overwhelmingly powerful, often unconstrained, and increasingly criticized counterinsurgency campaign. 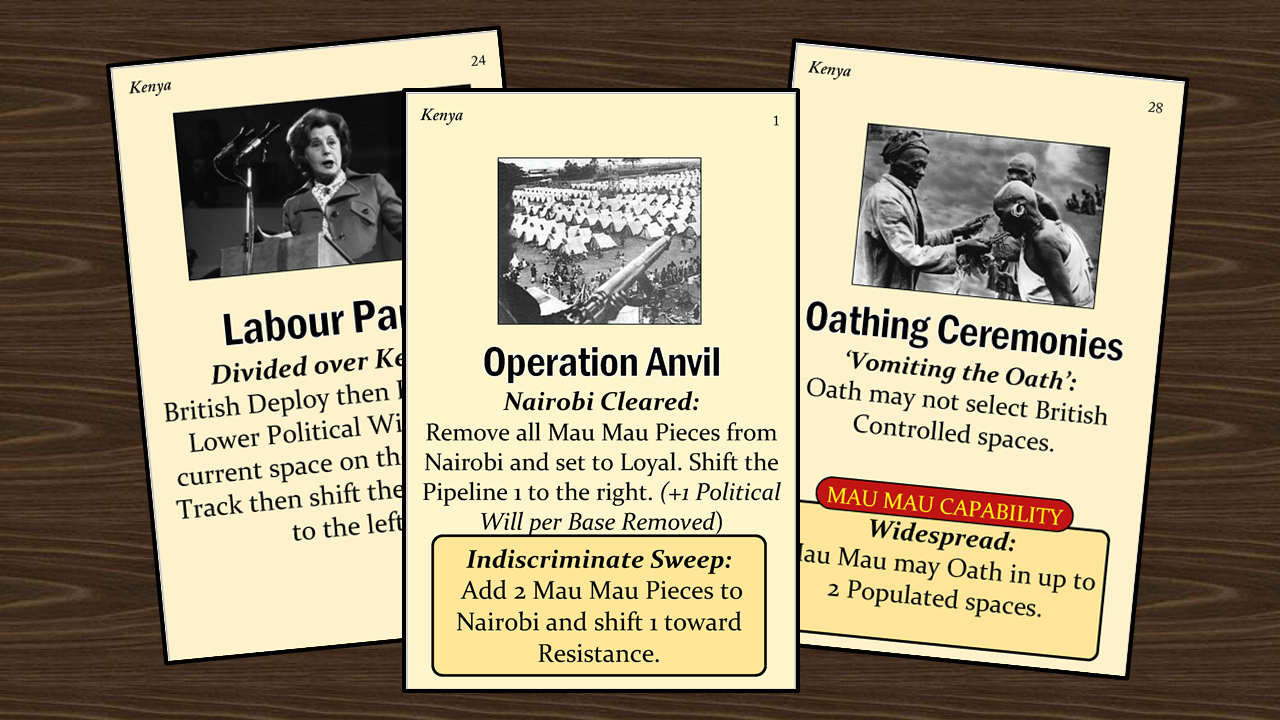 Prototype event cards for Kenya
Cyprus and Palestine: New Counter-Terrorism Mechanics
The next two conflicts in the pack depart more significantly from core COIN concepts because Britain’s two opponents in Cyprus and Palestine operated as smaller clandestine terrorist cells rather than the larger insurgencies depicted in Malaya and Kenya. Instead, new “counter-terrorism” tactics are modeled, such as Curfews, Intelligence, Arms Caches, and a more detailed Sabotage and Terror system. These two games offer a fresh approach to a different kind of conflict and provide an even quicker play experience for two-player COIN duels. 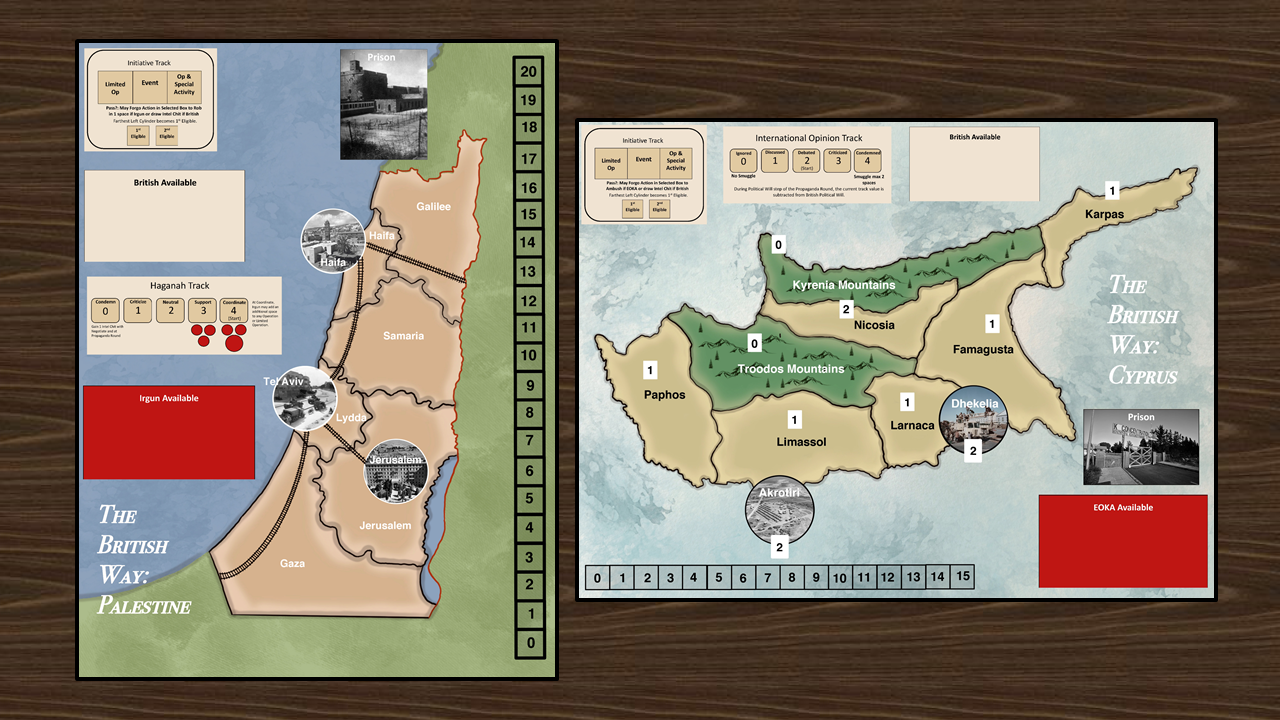 Prototype maps for Palestine and Cyprus
The British Emergency in Cyprus (1955-1959) was conducted under the shadow of international opinion and increasing pressure from the international community to respect human rights. As the British player tries to balance locking down the population while managing international pressure, the EOKA player will launch sabotage attacks in towns across the island while building their organization in the mountains. The British Way: Cyprus is probably the simplest of the four games in the pack, although the new counter-terrorism mechanics it introduces are significantly different from anything that has appeared in previous COIN volumes. 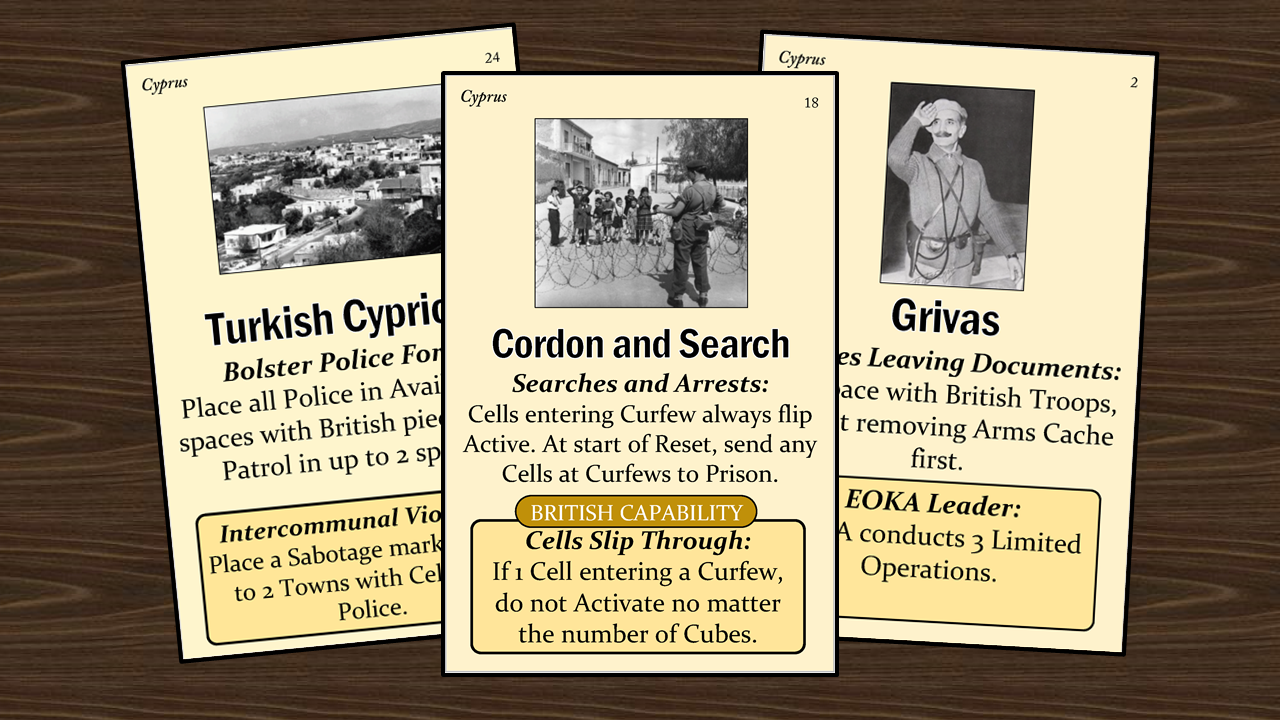 Prototype event cards for Cyprus
Likewise, during the Palestine campaign (1945-1947), the British player will be faced with the Jewish resistance groups Irgun and Lehi launching sabotage and terrorist attacks across Mandatory Palestine, while risking criticism from the US and other international observers if their response is too heavy-handed. The British Way: Palestine further develops the new counter-terrorism mechanics introduced in Cyprus, while also including unique game systems to model the British use of the blunt tool of Mass Detention, the shifting cooperation of Haganah (the Jewish Agency’s armed wing), and high-profile terrorist attacks such as the King David Hotel bombing. 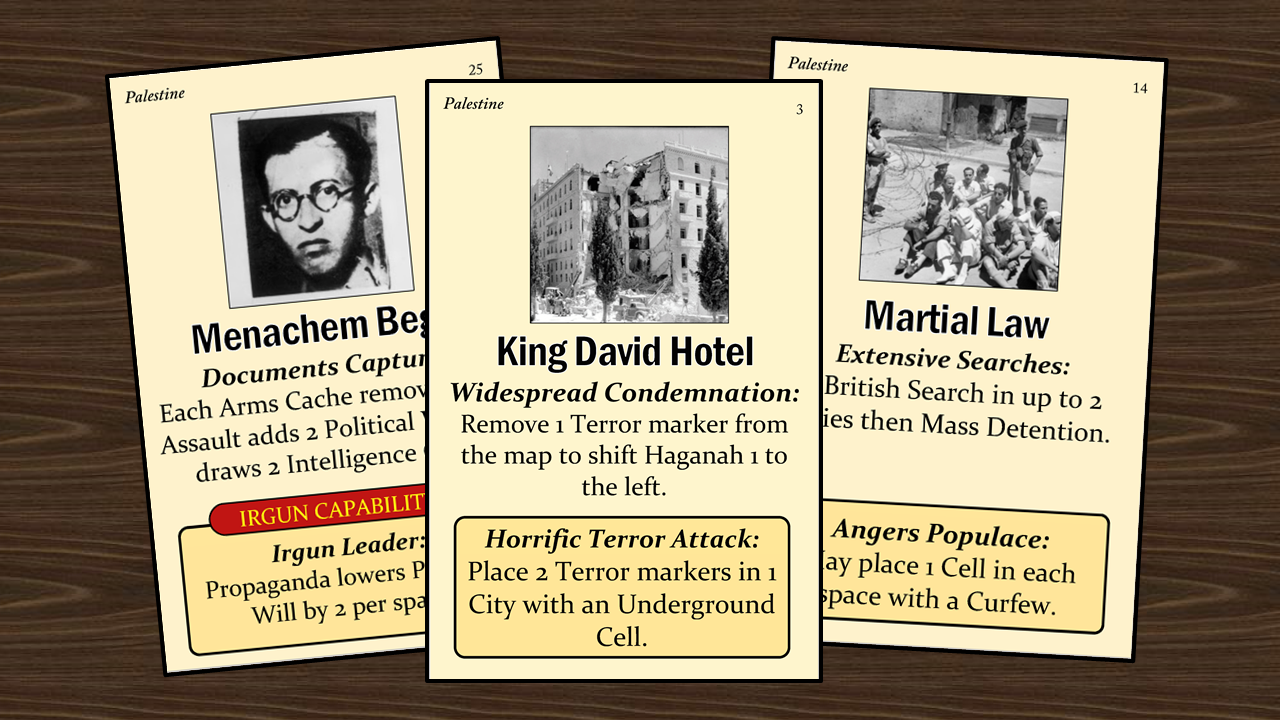 Prototype event cards for Palestine
A Note on “The British Way” of Counterinsurgency:
“that nauseating phrase I think I invented” – General Sir Gerald Templer on the term ‘Hearts and Minds’
The historical simulations included in The British Way are designed to depict the full array of strategies used by the British during these conflicts, ranging from the more benevolent provision of material benefits through pacification programs to the horrific measures used to gain control over the local population. Many myths have arisen about an ‘enlightened’ British approach to counterinsurgency that emphasized the use of minimum force and focused on winning the population’s “hearts and minds,” compared with the supposedly more violent approaches taken by the United States in Vietnam or by France in Algeria. However, new scholarship on these conflicts has confirmed the brutality of the methods commonly used by the British in their counterinsurgency campaigns. As summarized by the historian Hew Strachan, these conflicts were often decided by “the firm smack of government,” not the popular winning of hearts and minds. This multipack is intended to help synthesize and present these crucial developments in our understanding of British counterinsurgency, even if that means the simulations depicted are at times more thought-provoking than fun. The designer’s main goal is that players find these games informative about what happened during each conflict and why, and that the gameplay leaves them wanting to learn more. Each game will come with a detailed Background booklet describing the events depicted and listing additional sources, while the combined Playbook will include comparative essays discussing British counterinsurgency across the four games and how it is depicted in conflict simulations.