On October 24th of an unspecified year—which we are only legally allowed to disclose as “from the recent past”—“Super Storm Nancy” plowed into the East Coast of the United States. Thousands of miles of coastline were devastated, but for Plum Island, a large albeit vulnerable atoll smack dab in the middle of the storm’s path of destruction, it was a horrifying gray-green, apocalyptic nightmare.

Plum Island is a sprawling isle off the Carolina coast and is home to the vibrant seaside town of Greenport. While the heart of the island’s daily hustle and bustle lies in its commerce and tourism, the predominant employer and revenue generator for the island was housed in a huge complex of nondescript buildings located on the north end of the island. This mega-corporation was known locally as “The Pearl,” or more precisely, the Plum Island Research Laboratory (P.I.R.L.). It was an enormous facility run by scientists who conducted government-sponsored biological research and experimentation. All legal and ethical practices of course—or so we were told.

After the hurricane’s catastrophic cascade of water and wind abated, the island was crippled: all power was lost, there was much structural damage throughout, and the path to the mainland via the Great South Bay suspension bridge was rendered impassable. Due to a perfect confluence of unpredictable factors, the lab’s super-secret and highly experimental cylinders ruptured. The entire facility was inundated with a horrific lethal mixture of chemicals resulting in the deaths and disfigurement of hundreds of personnel who were taking shelter from the storm within the main containment facilities.
But the true horror was yet to come—these “deaths” were only temporary incapacitations. The poor souls who succumbed to the toxins were somehow revived by the bizarre mixture of chemicals, returning to “life” as monstrously altered mutations. In retrospect, we refer to these reanimated creatures as “Horrors” because—well honestly, what else could we possibly call them? The Horrors almost instantaneously evolved into vicious killing abominations that overwhelmed the survivors located in and near the main P.I.R.L. complex. After “The Pearl” was subsumed, there was only one place left to go to sate the voracious appetites of these re-born killers…a “human buffet” known as Greenport.

The Plum Island Horror is a 1 to 4 player game featuring cooperative play that combines tactical-level unit management with a tower-defense style survival mechanic. Each player will control one of six unique factions which represent the various groups that populate Plum Island. Each of these Factions has its own strengths and weaknesses, and the system encourages you to optimize for the group’s strengths and marginalize its weaknesses. Players must coordinate with one another, and the resulting synergy will hopefully be enough to successfully evacuate a city under siege and contain the horrific outbreak that threatens to spread beyond the island itself. If the players can succeed, they will win together, and the world will most likely be none the wiser to the averted crisis. If not, they will lose together and share the blame equally for failing humankind. 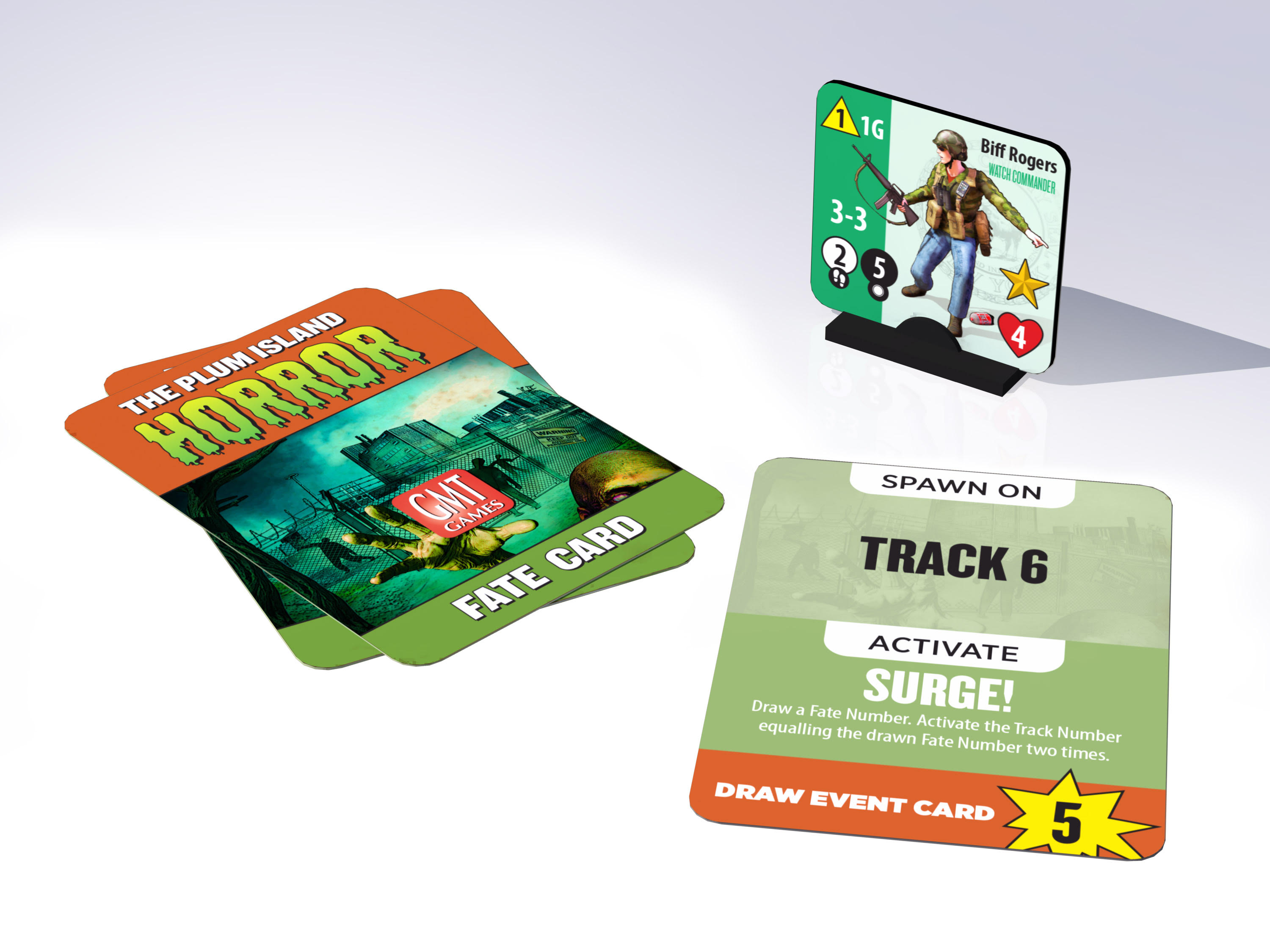 A Few Sample Components (Please note that this is a prototype image, not final art) 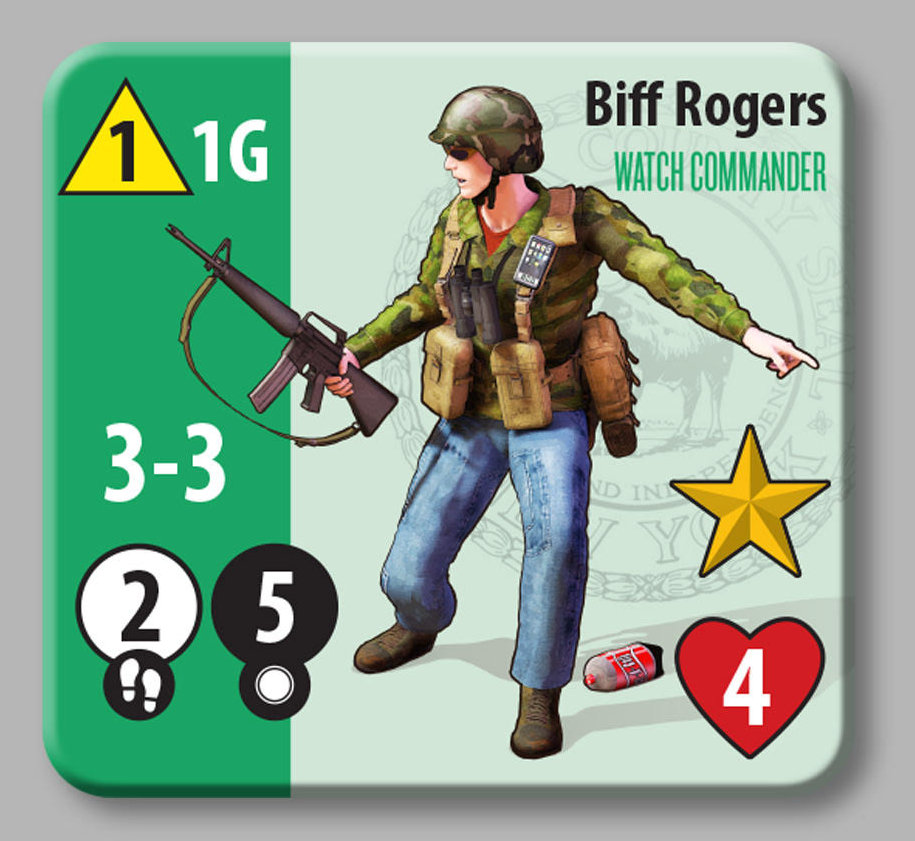 Sample Faction Standee (Please note that this is a prototype image, not final art)

The Plum Island Horror features six unique player Factions to choose from, each with their own set of strengths and weaknesses. The Factions are Neighborhood Watch, Greenport Township, Plum Island Constabulary, Islanders Athletic Club, P.I.R.L. Security Services, and National Guard. Each Faction has a leader, five basic units, and a Compound unit (a fortified base). I’ll cover each of these Factions in further detail in future articles, but for now, suffice it to say that each faction has unique flavor and all of the tools needed to get 80% of the job done.

Following
The Plum Island Horror also features a “follow” mechanic, which adds an extra layer of strategy and a “push-your-luck” element that increases the game’s tension (not that it really needs more tension but making players as nervous and anxious as possible is very satisfying to me). After a faction finishes their normal activation, players have an option to Follow. If they choose not to, nothing happens—impending doom is waylaid for the time being, and the next Turn Order Cube is drawn. If a player does choose to Follow however, they may immediately conduct an out of turn Action with an eligible unit. If that sounds too good to be true, well, that’s because it is. After each Follow action, a player must draw a Fate Card. If the entry indicates “No Event,” then nothing further happens, and the next player has the option to Follow. If, however, the entry shows “Draw Event Card,” then all Hell breaks loose. First, no further Follow actions may occur during this round. Second, and perhaps the worst part, the players must draw and resolve the top Event Card, which is almost always pure evil. All of that to say, the Follow mechanic does add an integral layer of cooperative tactical strategy that keeps the whole table on the edge of their seats.
The Cards 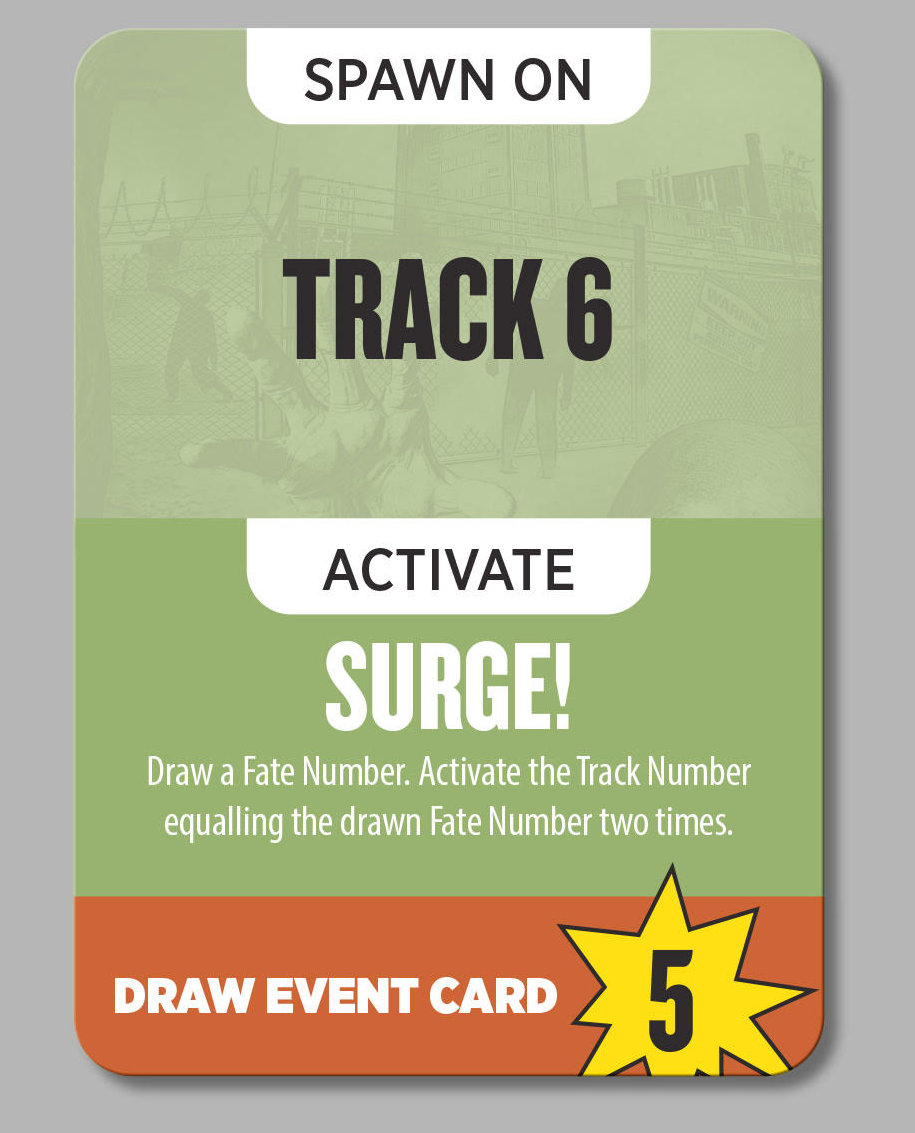 Sample Fate Card (Please note that this is a prototype image, not final art)

The Plum Island Horror features three unique decks of cards that each drive the game along in different ways.

Fate Deck: The central driving force in the game is the Fate Deck. This deck of cards directs the Horrors’ actions, determines if an event occurs, and provides a random number to resolve various actions. Let’s break each of those down. First, when a Horrors Turn Order Cube is drawn, a Fate Card is drawn, and the two main boxes on the card effectively provide the Horrors’ marching orders. As can be seen in the Fate Card graphic, the top box indicates the track on which new Horrors “Spawn.” Then the second box triggers a track to “Activate,” which moves Horrors further into the heart of Greenport and regularly leads to an attack on­ players’ units. Second, all Fate Cards have an “Event” determinant which is used when Following (see above). Finally, each card has a random number listed in the lower right known as the “Fate Number.” The numbers emulate the roll of a die with numbers ranging from “1” through “6” that are evenly spread throughout the deck. Whether you are delving the wreckage of a shop for supplies, trying to steer clear of Horrors, or trying to team up with a buddy to get a key location up and running again, this deck of cards often determines the outcome.

Event Deck: These cards are almost always bad news for the players. The two main times an Event Card is drawn are when the “Impending Doom” Turn Order Cube is drawn or when a player takes a Follow action and gets the “Draw Event Card” instruction. These cards can spawn new Horrors, bring in a super-Horror, “Mutation” unit, affect the Biohazard Track, and create all sorts of other dangerous conditions.

Search Deck: Players can do a “Search” Location Action in certain designated areas. If they choose to use one of their precious action points to search, they get to draw two Search Cards and pick one to keep. These come in a variety of narrative styles—some are choices, some are tests, and others report something that just happens. They provide generally positive news for the players, and deciding on where and when a player uses an action to dip into these waters can be the difference between victory and defeat.