In 1984, Malcolm Sutton began researching the name, age and status of more than 3,500 lives lost during the period of conflict known as the Troubles. Sutton’s index begins at 14th July 1969 and stops at 31st December 2001, several years after Republican and Loyalist groups renounced violence. It records a total of 3,532 deaths – children, mothers, soldiers, police, paramilitaries, tourists, farmers, teachers, politicians, milkmen, on and on. The result is a monolith of unassailable facts: a record of lives extinguished that stands impervious to revisionist winds, to efforts by republicans, unionists and others to shape their own narrative of the Troubles.

“I wanted it to be a memorial to the people that had been killed,”
he said, speaking by phone from his home in Belfast. “I wanted to
record these deaths equally. That was important. Living here, you see
how some deaths received great publicity and others were ignored.
There’s a kind of pecking order. I wanted to treat them the same.”

However, it is estimated that indirect deaths associated with the Troubles exceeds 20,000:

“it could be argued that these 24,000 should also really be regarded as conflict-related and arise from what is known as ‘structural violence’ where socio-economic places limitations on a population’s quality of life causing harm and increased mortality” (O’Neill, 2017).

In 1962, the IRA ended its Border Campaign, which was aimed at removing British Forces from – as they saw it – Irish soil. Northern Ireland had been part of the United Kingdom since 1921/22 when, despite three attempts to achieve Home Rule: in 1886, a year after the General Election that saw the Liberal Gladstone elected as Prime Minister, it was defeated in the House of Commons after a split in the Liberal Party; in 1893, a Second Home Rule Bill was successful in the House of Commons, but was defeated in the House of Lords.

In 1912 the Third Home Rule Bill was introduced but suspended until after the First World War; this led to the political and military crisis known as the Home Rule Crisis of 1912 whereupon Unionists formed paramilitary organisation the Ulster Volunteer Force to defend the status quo of remaining part of The Union; similarly the Nationalists formed a paramilitary organisation, The Irish Volunteers, “to secure the rights and liberties common to all the people of Ireland”.

However, after the Easter Rising of 1916, and Ireland’s conscription into the war effort, the citizens of Ireland had become disillusioned with Home Rule; subsequently, in the 1918 General Election, the Irish Parliamentary Party (IPP) suffered defeat. The Irish War of Independence ensued after Sinn Fein’s success at the 1918 Election, and after what was a guerrilla war between the Irish Republican Army and the quasi-military Royal Irish Constabulary (RIC) and British Forces. A peace agreement was reached and in 1920, The Government of Ireland Act 1920 partitioned Ireland, setting up separate Home Rule Parliaments in Dublin and in Northern Ireland. The Anglo- Irish Treaty, which ended the Irish War of Independence, led to the creation of the self-governing Irish Free State in 1922.

And on the 15th November 1922, Northern Ireland participated in the Westminster General Election for the first time since its creation. With twelve parliamentary seats available, the Unionists won 10 of them; the two seats of Fermanagh & Tyrone were won by Nationalists. In its original form, the IRA’s desire to achieve a united Ireland would continue from 1922 until 1969. In 1956, there was renewed operations known as The Border Campaign, supported by the South, attacking key infrastructure in Northern Ireland. By 1962 it had officially ended. And by 1959 General Election, the Unionists had achieved complete political monopoly in the province. 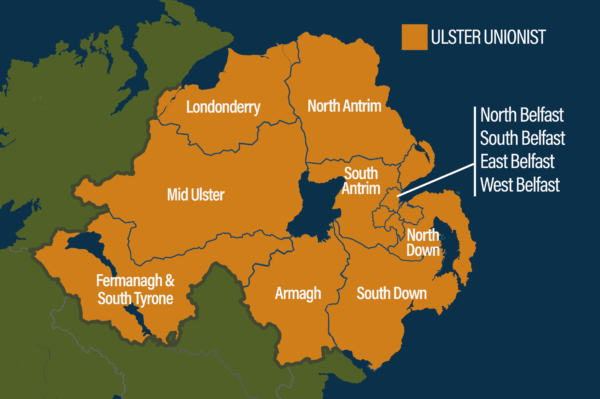 However, within a number of years that would witness the germination of a Civil Rights movement supported mainly by the Nationalist population, and Terence O’Neill’s Unionist Government strengthening relations between Northern Ireland and The Republic of Ireland, 1966 witnessed a sustained paramilitary campaign by another organisation: the Ulster Volunteer Force (UVF). They feared that these apparent concessions were threatening to Northern Ireland’s Union with Great Britain.

And so it began.

2021 marks the 100th Anniversary of the creation of Northern Ireland.

“[S]omeone may well ask. “Why recall such things? It is the writer’s duty to tell the terrible truth, and it is a reader’s civic duty to learn this truth. To turn away, to close one’s eyes and walk past is to insult the memory of those who have perished. Only those who have learned the whole truth can ever understand” (Grossman, V. p165-66, The Hell of Treblinka in The Road: Short Fiction and Essays, Maclehose Press, 2011) 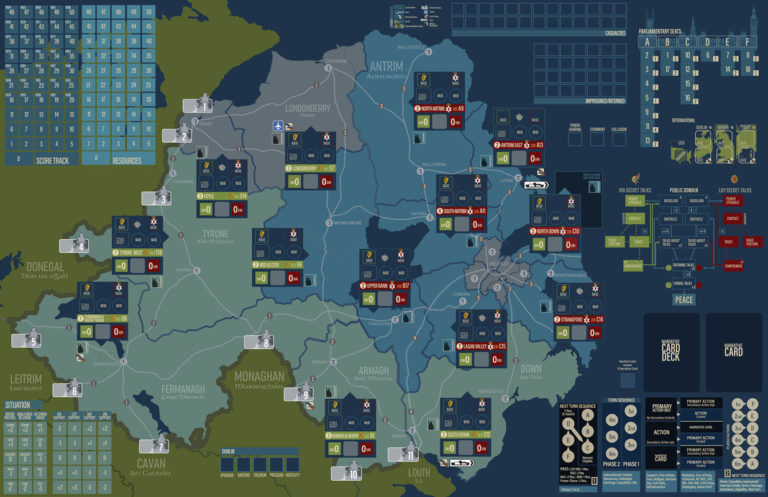 The Troubles is a two-to-six player, card-driven simulation depicting the Paramilitary and Security Force conflict that gripped Northern Ireland for almost 4 decades between 1964 and 1998. Equally foregrounded are the national and international political affairs that saw the British Army undertake its longest deployment in its military history – on its own streets.

Each player takes the role of a Faction seeking to guide Northern Irish affairs, whether it is political, paramilitarily or through martial law: the British Forces (including the UDR), the Royal Ulster Constabulary (the RUC was the Government security force), the Provisional Irish Republican Army (IRA), the Loyalist Paramilitaries (LOY), and the Nationalist (NAT) or Unionist (UNI) politicians.

It encompasses the USA’s involvement in the international aid and arms deals that supported the IRA; facilitates the exportation of terror to the streets of Great Britain and Europe; depicts the complex relationship that existed between the Republic of Ireland, Britain and its northern neighbor. And it provides Developments, a feature that mirrors the increasing technological and intelligence-led advancements on both sides.

Each Faction may use Primary and Secondary Actions analogous to its real world counterparts, or may choose from the 259 rich Narrative Cards, divided into eight key epochs in Northern Ireland’s recent history: