Gathering at the monastery of Sringeri in Karnataka, the Sangama brothers have anticipated the ebb of Delhi’s authority in the Deccan and the crumbling of the Hoysala kingdom. From these ashes will rise Vijayanagara, “City of Victory,” which will ascend to take its place among the great empires of the medieval world. Meanwhile, the Bahmani Amirs have established their own kingdom, one which will rival Vijayanagara in strength and culture for decades to come. And in the mountains to the northwest, Mongol hordes are gathering, their eyes fixed upon Delhi from above.

Vijayanagara: The Deccan Empires of Medieval India, 1290-1398 depicts the epic, century-long rise and fall of medieval kingdoms in India over two dynastic periods, for 1-3 players.

Vijayanagara is the first game in the new Irregular Conflict Series. with gameplay inspired by GMT’s COIN system, players will take on the asymmetric roles of the Delhi Sultanate, the Bahmani Kingdom, and the Vijayanagara Empire, navigating event cards and unique action menus as they contest to write themselves into medieval Indian history. Players will rally local amirs and rajas to their cause, construct epic temples, forts, and qasbahs, and battle for supremacy over the Deccan plateau.

4. A fourth non-player Faction (Mongols) operated by the Bahmani and Vijayanagara players.

Vijayanagara is intended for players new to asymmetric wargames and veteran COIN players alike. The factions have distinct capabilities and each is faced with different strategic decisions, offering a very high degree of replayability. The game is streamlined: all player actions and most rules are visible on the table on player aids and cards.

Gameplay and turn order is organized around a deck of unique event cards. With each new card, factions have the option to carry out the event or to select from faction-specific Commands and special Decrees; Commands such as the Conscription of new troops, Governing in Tributary Provinces, and Migration to begin life anew, and Decrees ranging from Demanding Tribute, Conspiring with Delhi’s Governors to betray the Sultan, and forming new Alliances with minor regional powers. 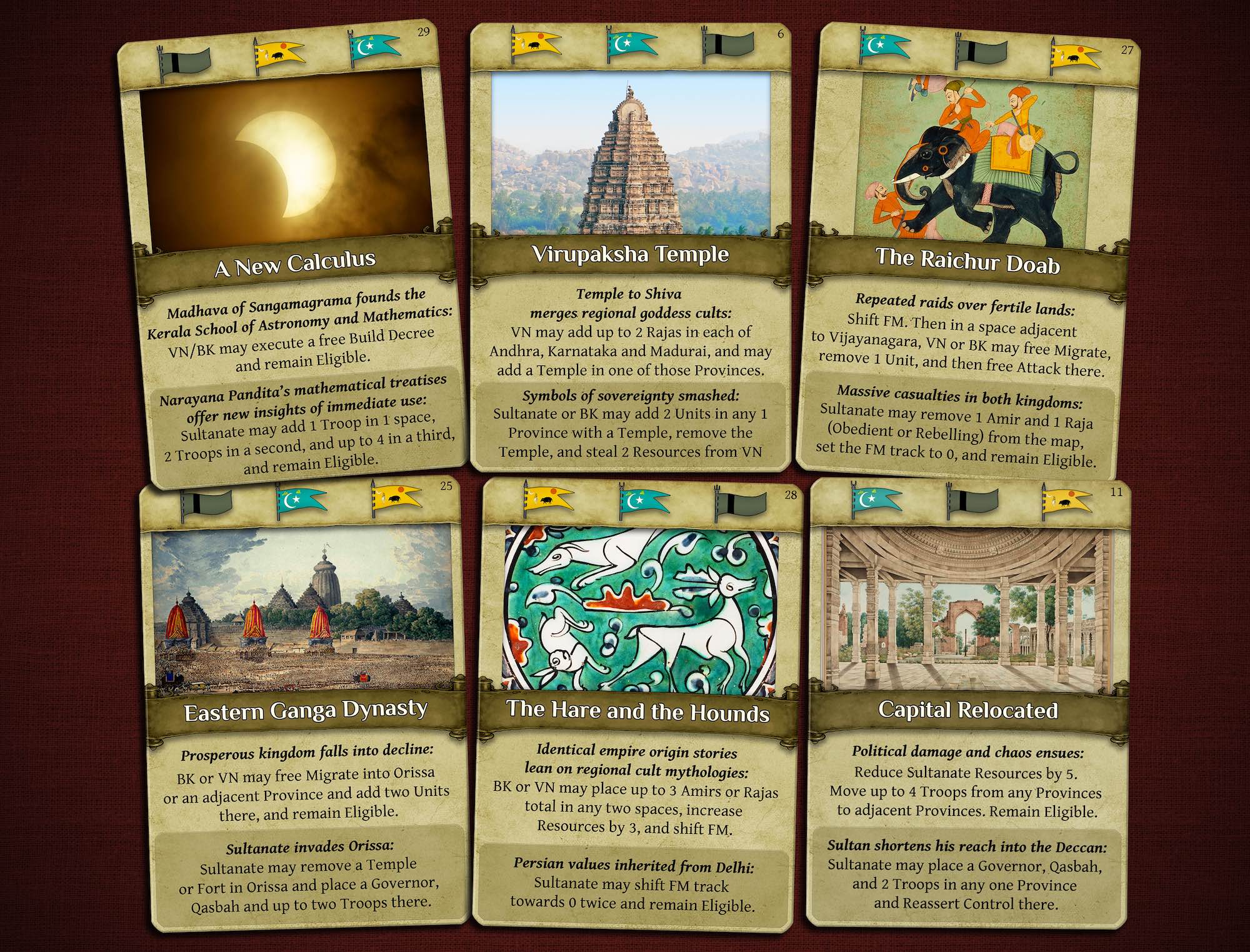 Sample Cards for Vijayanagara (Please note that these are prototype images, not final art)

It is 1290, and the Indian subcontinent is dominated by the Delhi Sultanate, its influence stretching from the mountains in the north to modern-day Madras in the southern peninsula. Wealthy kingdoms beyond the Vindhya range and deep into the Deccan plateau have caught the eyes of Delhi for generations, and governors have been sent out to the southern provinces to impose the Sultan’s demands of tribute. The Sultan’s quest for riches comes with some urgency; ever-looming is the threat of Mongol incursions from the northwestern frontier, requiring the continual purchase of foreign war-horses from Central Asia and the payment of troops.

But grand schemes of foreign conquest, currency blunders, and a disastrous attempt to move the capital from Delhi to Devagiri are laying bare its weaknesses under Sultan Muhammad bin Tughlaq. Rebellions are starting to spread throughout the south in the Deccan, to the west in Gujarat, and to the east in Bengal. Desperately needed tributary payments are falling into arrears, requiring forceful reminders from a royal army which is expensive to maintain. 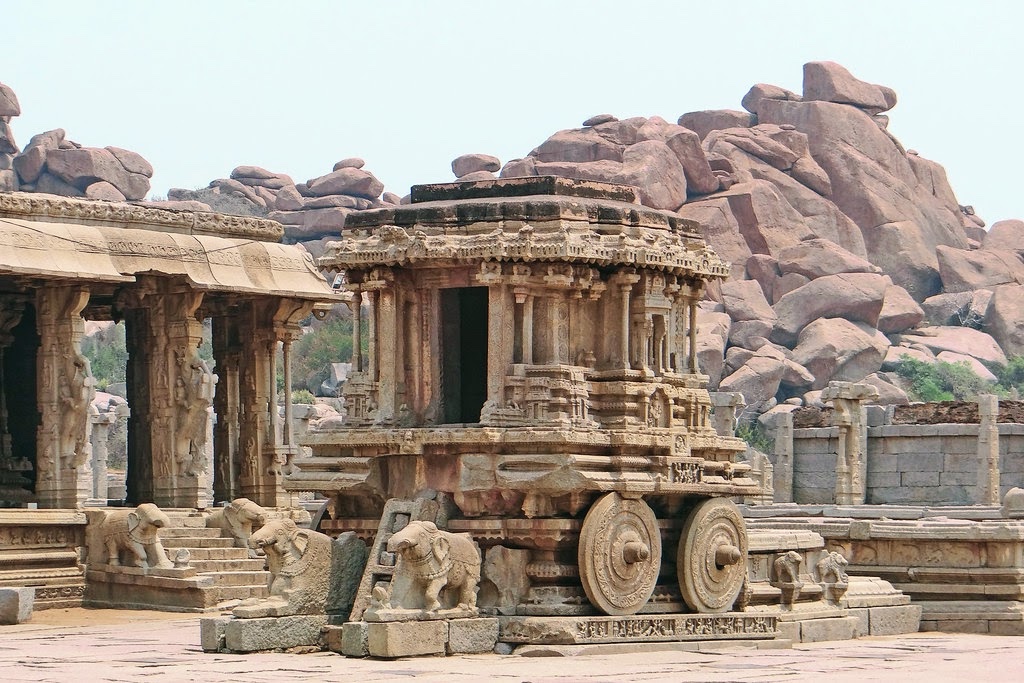 By 1347 with the Sultanate’s might subsiding, two independent kingdoms have formed on opposite sides of the Krishna river in the Deccan plateau. Once-loyal governors forced by the Sultan to relocate from Delhi have conspired to form an independent Sultanate, the Bahmani Kingdom. Further south, the Sangama brothers have rallied Rajas across the land and founded the Vijayanagara Empire.

Although the oppressive tribute demands from Delhi have been cast aside, there remain fierce contests for important economic hubs, Goa and other port cities to the west, and the lush, fertile Raichur Doab between the Krishna and Tungabhadra rivers. Nayakas, warrior kings emerging from the embers of the Kakatiya dynasty, are aiding the Bahmani Kingdom in some contests of power and the Vijayanagara Empire in others. But the Sultanate may still have the power to reassert its control in this region, if it can balance its many pressing challenges.

The survival of each upstart kingdom will depend on its origin stories becoming infused with cult mythologies present in the region for centuries. One such origin story, the myth of the “Hare and the Hounds,” is even shared by both the Bahmani and Vijayanagara kingdoms. The narratives which are emerging from these early steps away from the Delhi Sultanate’s grasp, the foundational myths of these regional rivals, are beginning to spread throughout the land and into the spoken history.

The Delhi Sultanate – “A totalitarian regime nears its twilight” 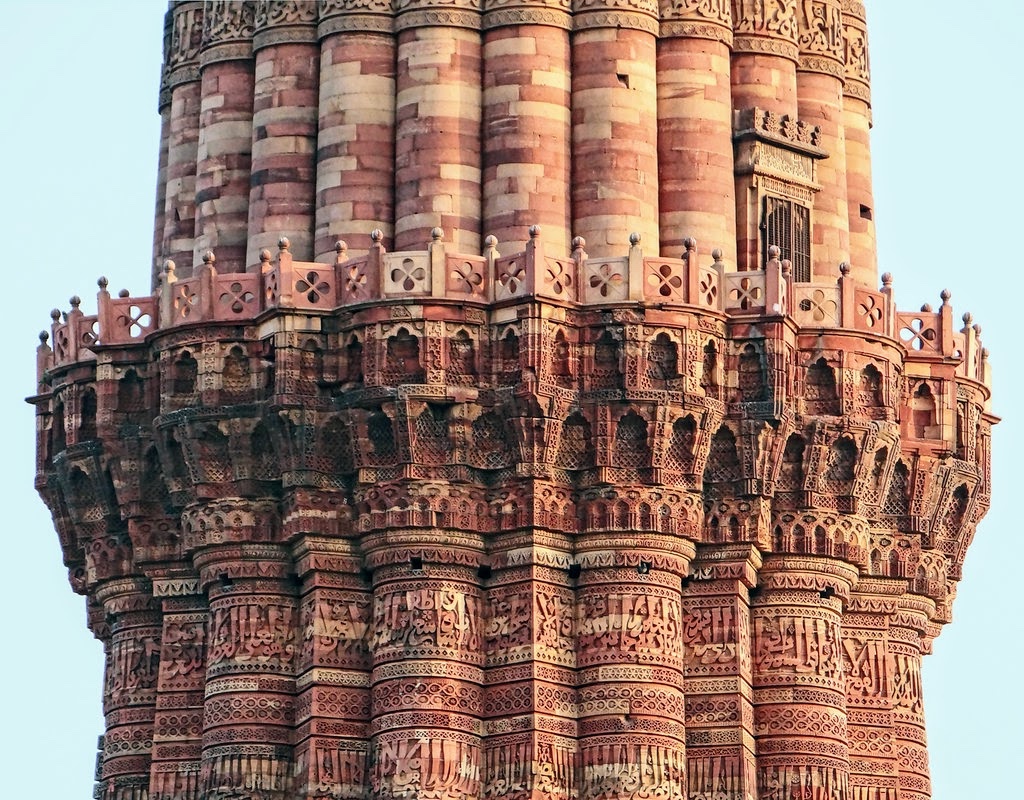 The Sultanate player must confront the constant threat of the Mongols, who are amassing in the mountains, advancing closer to Delhi, and plundering along the way, while strategically ceding control in some provinces and reasserting it elsewhere in a rebellious south. The player will send governors and troops to strategic locations, politically manipulate obedient Amirs and Rajas and attack rebelling ones, and demand tribute from its tributary regions. They will construct fearsome Qasbahs, conscript troops, and carry out epic campaigns to impose their will on the nascent southern kingdoms.

The Bahmani player is in the role of the ruler of the Bahmani Kingdom and its Amirs (commanders). Some of Delhi’s governors are exploiting their autonomy and distance from Delhi. Many will go on to rebel— ruling small kingdoms with their own armies, they will form or join the Bahmanis. Leaning on a network of other elite nobles and governors, they will conspire and simultaneously declare an entire Province to be an independent state, cutting off the tribute to Delhi completely.

The Bahmani player will spread its Foundational Myths, growing its potential pool of allies, including other governors and Rajas who now see the wind blowing towards an ascendant Bahmani Kingdom. They will enjoy the benefits of a growing culture, attract great minds from afar, construct powerful Forts, and exploit their substantial military advantages both against raids from Delhi to the north and their Vijayanagara rivals to the south.

The Vijayanagara Empire – “Lords of the Eastern and Western Oceans”

With the Delhi Sultanate receding from the southernmost reaches of the Indian subcontinent, Rajas further south see their own opportunity to form independent kingdoms and cast off their tributary relationship to Delhi. Like the Amirs to the north, the Rajas rule over small kingdoms and maintain their own armies, identifying one after another with the Vijayanagara Empire. And like the Amirs, the oppression of Delhi is motivating well-timed rebellions. 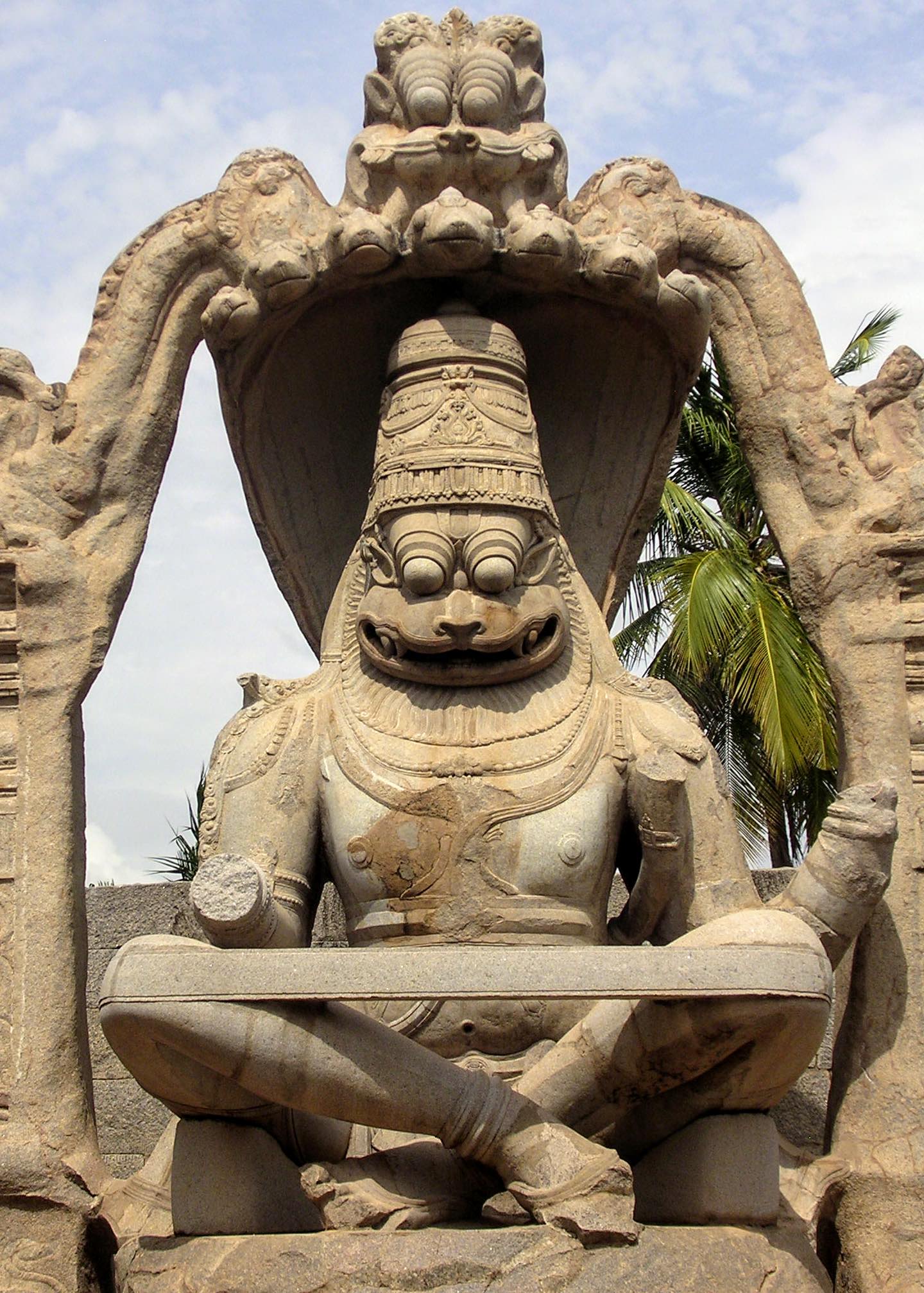 Vijayanagara’s assertion of authority is based on the weaving of its origin story into a variety of interconnected cult mythologies present in the region for centuries. The spread of these stories, aided by successes against rival powers, will attract the loyalty of powerful families like the Nayaka warrior kings. The Vijayanagara player will make key alliances with other Rajas and Nayakas in the region who will raise the Vijayanagara flag, and they will construct awe-inspiring temples which rise as great symbols of sovereignty, focal points which will enhance economic development and draw other Rajas into the fold.

Mongol Invaders – “A threat emerges from the mountain passes”

A fourth non-player faction also features in the game: Mongol Invaders. The actions of the Mongols are guided through temporary strategic dialogues with the Bahmani Kingdom and Vijayanagara Empire, natural potential allies given their strong commercial presence in the Indian Ocean, and a shared enemy in Delhi. The Sultanate must contend not only with these Mongol raids and temporary alliances but also the eventual arrival of the legendary Turko-Mongol conqueror, Timur. 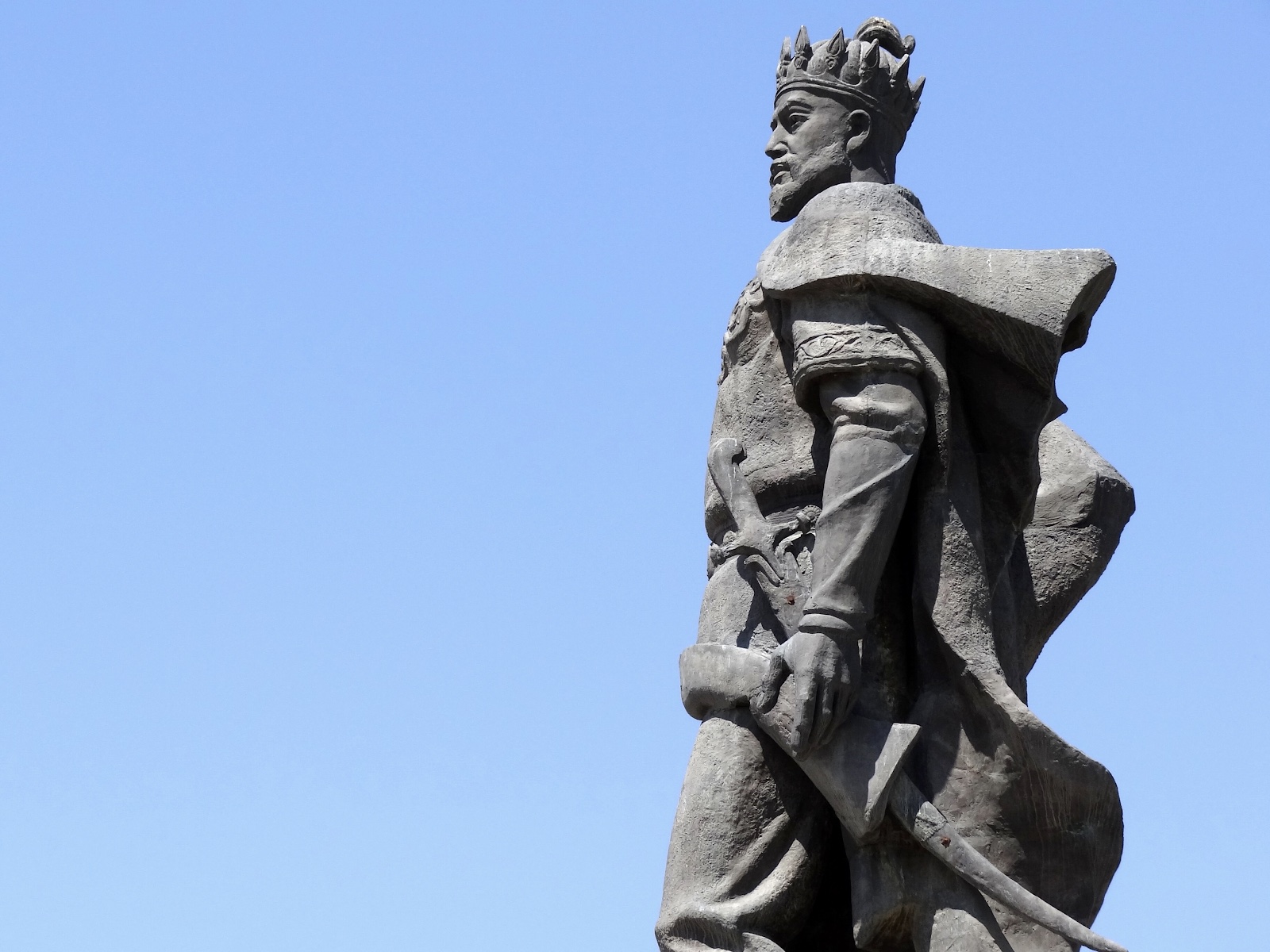 The people of the adjoining districts all flocked into the fortress of Delhi, and the old fortifications had not yet been built up, so that such consternation among men has never been witnessed, nor even heard of; for all the inhabitants of the city both great and small were completely overpowered with terror. – Zia al-Din Barani, historian and political thinker (1285-1358), on the arrival of the Mongol hordes to Delhi. 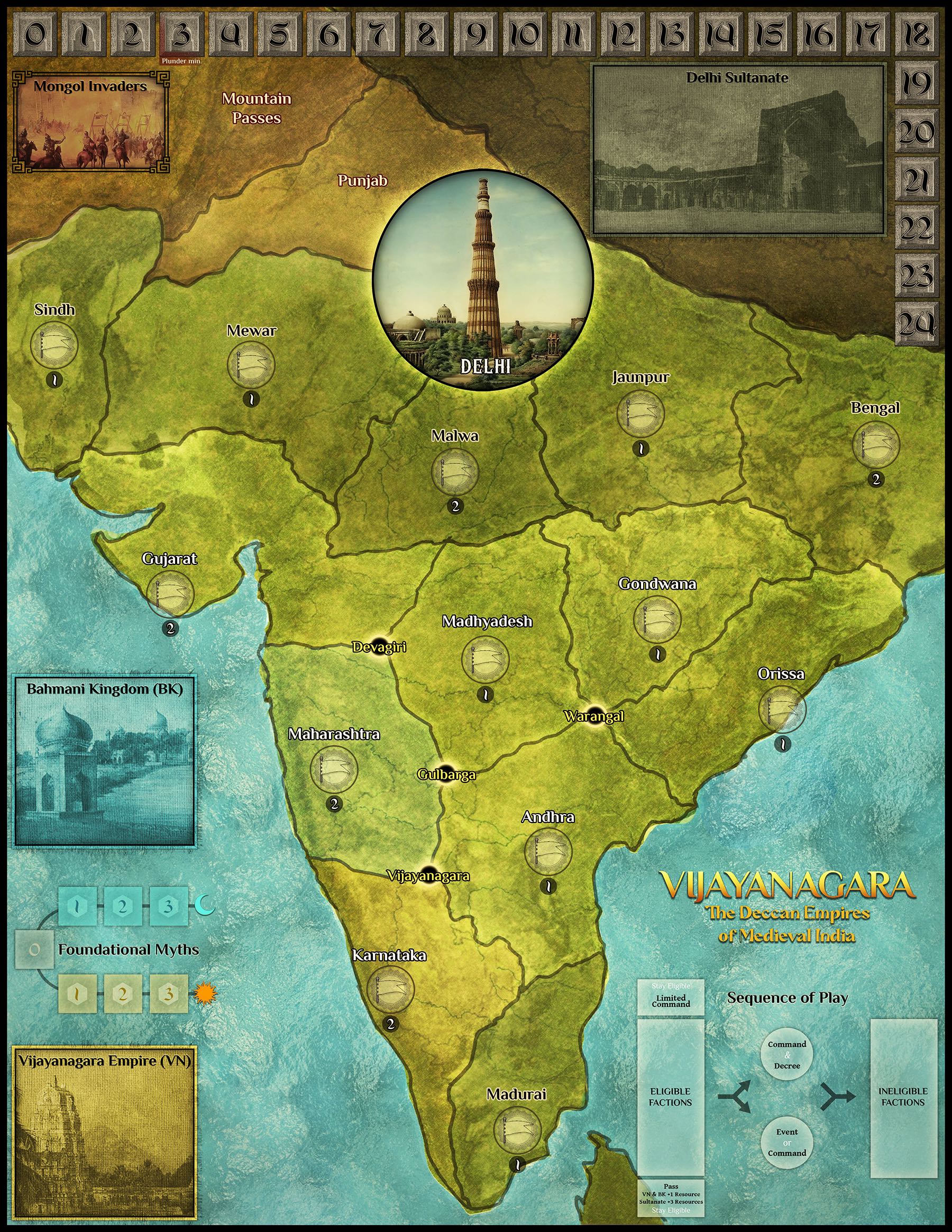 Vijayanagara Map (Please note that this is a prototype image, not final art)